The last day for players to be bought out and waived is today, but there aren’t many more players expected to be bought out. With the market as it is, there are still some great free agent options for the Cavs, and they are reportedly looking into this as well.

According to Calvin Watkins of ESPN, the Cavs and Heat are among teams looking into recently bought out guard Marcus Thornton.

Marcus Thornton has three to four teams looking at him including Miami and Cleveland. In wait and see mode right now.

For his seven-year career that saw him play in New Orleans, Sacramento, Brooklyn, Phoenix, and Houston, Thornton has averaged 12.4 points, 2.0 rebounds, 1.4 assists, and 0.9 steals in 24.1 minutes per game. He’s also averaged 1.6 three pointers made per game on 36% shooting from downtown, making him an excellent asset to the Cavs should he decide to join Cleveland’s pursuit for a championship. Aside from that, he’s just 28 years of age, and has been relatively durable during his career.

Here are some clips of Thornton’s career highlights! 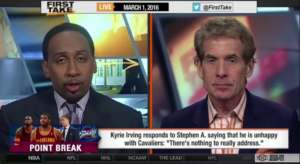