The Renaissance of Kevin Love Back when the Cavaliers traded the first overall pick of the 2014 draft, Andrew Wiggins, for Minnesota Timberwolves All-Star Kevin Love, many Cleveland fans were split on whether or not it was the right move. After drama regarding “fitting in”, a devastating shoulder injury in the playoffs, and numerous trade rumors, Kevin Love started to truly find his groove – leading up to the defensive stop of a lifetime against Stephen Curry to help the Cavaliers win their first ever NBA title. This season, Kevin Love has been working to silence doubters once and for all by playing close to the level he was at when he was the first option on the Timberwolves, while also fitting perfectly into the Cavaliers offensive and defensive schemes.

First and foremost, Kevin Love has been great while shooting from the field. He’s shooting his best FG% since he’s come to Cleveland, as well as his second best FG% of his career from 10-16 feet and his second highest three point percentage. In fact, his 39.7 3PT% is a full 3.7% higher than what he shot last year. The only other season where he shot better from beyond the arc was 2010-11, where he shot 3.9 less threes per game. All together, his Effective Field Goal Percentage – a weighted percentage based on the three pointers being worth more – is the highest it’s been in his nine-season career. 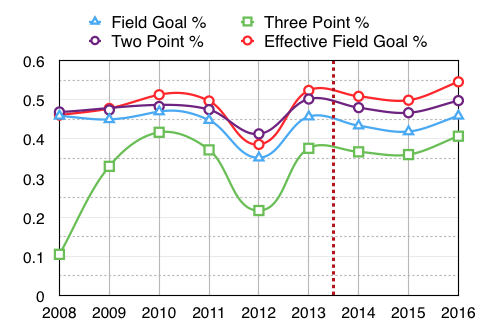 Secondly, the way Kevin Love is being used on offense has been completely retooled.   His Usage Percent, a measurement of the percentage of team possessions a player uses, is currently the highest it’s been while on the Cavaliers. At 27.3% of all possessions, it’s 3.8% higher than the 2015-16 season, 5.7% higher than the 2014-15 season, and just 1.2% lower than his highest percentage while on the Timberwolves. Love is making a full 31.3% of all Cavalier three point shots, as well as accounting for 35.1% of our rebounds. One of the most notable changes this season has been the inclusion of Love on offense in the first quarter. He is averaging 9.1 points per game in the first quarter alone – 3.7 more than last year and the most in the entire NBA. In addition, his 21.8 points per game are the third most in his career, and 5.4 more than his next highest while on the Cavaliers.

Lastly, Kevin’s intangibles have been paramount to the Cavaliers success while he’s on the court, and have certainly shown in some of his advanced statistics. While on the court this year, Kevin Love and the teammates surrounding him have had an Offensive Rating – or points scored per 100 possessions – of 112.3 (the highest in his career). While this is only 0.9 points better than the Cavaliers on average as a whole, when Love is on the court, him and his teammates allow just 100.6 points (the least in his career). That is a full 4.9 points better than the Cavaliers allow as a team. Furthermore, Love is averaging over 1 loose ball recovered per game – most on the Cavaliers – and contesting the third most shots per game. While defending three point shots, Love has held opponents to 5.5% below average this season.

Love has truly become an integral part of this team; instead of being an accessory that stands in the corners and waits for the play to come to him, he has asserted himself on both ends of the floor and has shown he can be the focal point on offense at times. By utilizing Kevin Love effectively starting at tipoff, the Cavaliers are able to save Kyrie Irving and LeBron James for crunch time while also jump-starting solid beginnings to games. Love has been everything a Cavaliers fan could have hoped for back when the front office first made the trade.  As LeBron James said in early December, “He’s the Kevin Love of old, and this is everything we expected out of him”.