Which remaining championship contender casts the most balanced roster? 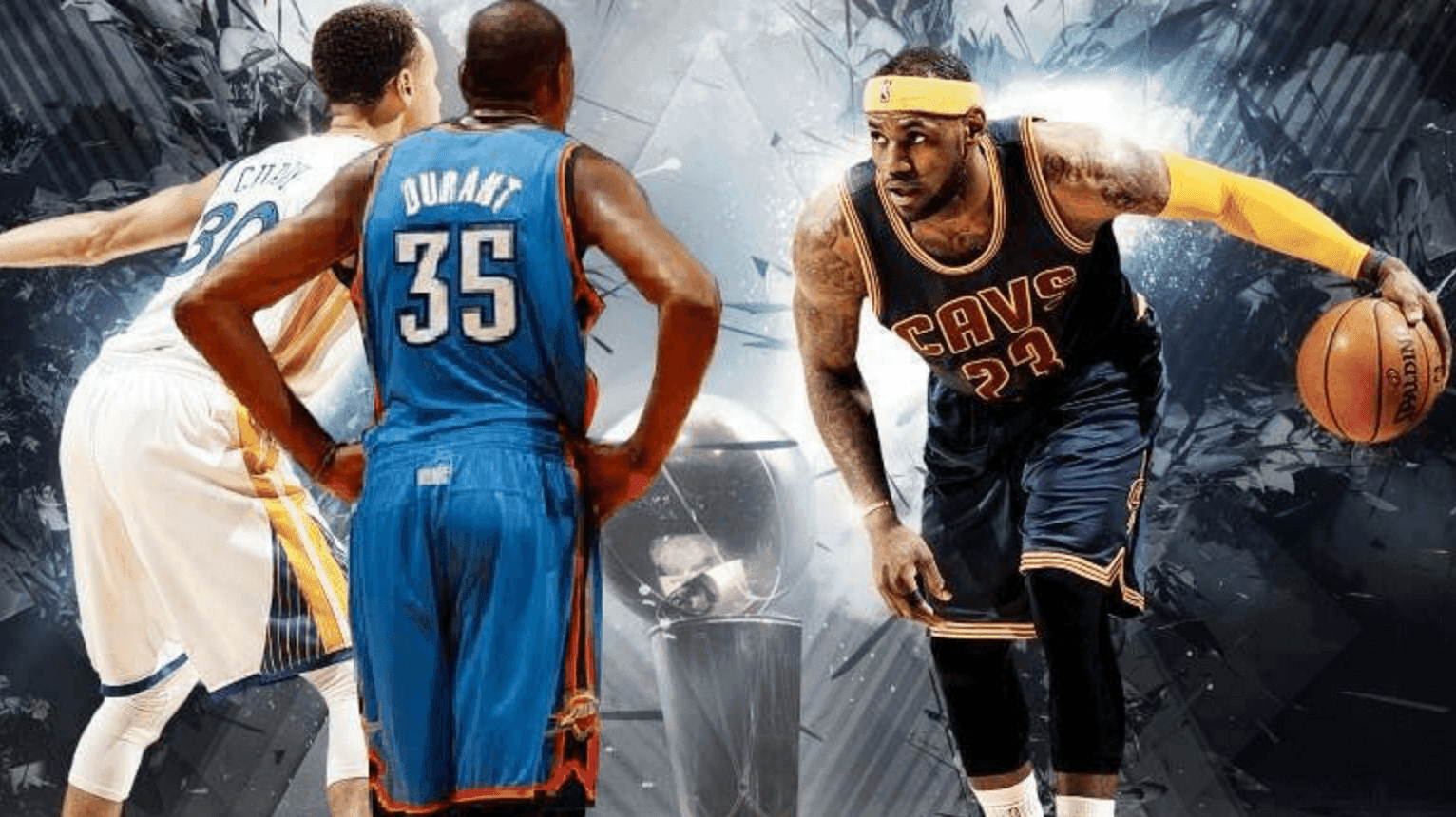 The city of Cleveland is witnessing the team they envisioned when LeBron James came home. Firing on all cylinders and dismantling three teams in 14 games, the Cavs have stormed into their second straight (LeBron’s sixth) NBA Finals. No team has dominated like Cleveland these playoffs; so much so, personalities around the NBA have definitely stood up and taken notice of this powerful ascension.

If you look close enough, you’ll realize this success isn’t a by-product of simply being in rhythm. Instead, they have been a calculated and executed measure of excellence by the entire cavalier roster and their coaching staff. The Big Three has never played this harmoniously, but now they’re transcending the box score by leading and engaging the Cavs’ very deliberately selected role players.

Each players’ roles and impacts are different, so determining where they fit in the puzzle in regards to lineups is important. Now with two possible matchups against with Oklahoma City or Golden State, the Cavs will inevitably face a team with depth. Minutes will matter, and when comparing usage to production for each team, the Cavs will need to maximise the minutes of all players who see court action in order to be successful. In their new balanced production, the Cavs could have found exactly what could give them an advantage in the Finals.

*Let’s have a closer look at the two potential opponents we may face in the Finals, and how their usage and balance compares to the Cavaliers.

Usually, when a player’s usage decreases, it is down to reduced minutes and attributes to a drop in production; however in the Cavs case, this is flipped. How? Due to the Big Three’s influence, and the efficiency in which everyone are playing. With the Big Three playing at an extremely high level, it is allowing role players to maximise and execute their specialist skills in limited minutes. Their roles are very succinct, specific and clear, which is helping their contributions. The entire Cavaliers roster has done a superb job of understanding what is expected of them and implementing this within each playoff series so far.

Another typical assumption is that a higher average usage percentage means every individual has a higher usage, but a team like the Thunder skews that normality with a ball-dominating tandem of Westbrook and Durant. Cleveland has the lowest average usage, but this more accurately indicated an even distribution of play-making with primary ball-handlers like James and Irving making fewer plays than expected and role players like Dellavedova and Frye making more plays than expected. Intelligently, the Cavs have ensured either Irving, James or Love are always on the floor at every moment throughout the game. These three players can create their own offense, which in turn, is opening up opportunities for others.

In regards to LeBron, his playoff mode has been outstanding yet again. His heavy minutes is significantly helping the Cavs, who are only benefiting from him spending more time on the floor. His impact is most evident when he starts the second quarter with the bench unit, allowing the Cavs to continue to score the ball and be fruitful on both ends. Love has increased his minutes from 31.5 minutes per game in the regular season to 32.5 in the playoffs. Irving’s minutes have gone up from 31.5 to 35.8 and LeBron’s minutes have increased from 35.6 to 37.9 this post season. With Kevin Love on the floor, the Cavs are +10.0. With Irving, they are +7.4, and with LeBron they are +13.6. Their impact is extraordinary, and the Cavs’ roster is benefiting from their outstanding production. As of right now, the Cavaliers are 15-2 all-time in the playoffs when the Three have all played together at the same time, they are 12-2 this post season alone. Further, when each member of the Big Three scores 20+ points in a single game this season, the Cavs are 10-0.

For Oklahoma City Thunder, their overall usage percentages indicate either Durant or Westbrook will have the ball each possession. Each OKC All-Star has played over 40 minutes in three of the five Western Conference contests. It’s no secret the Thunder are a two-headed monster, and both of their superstars will take turns in attacking the defense. Although, the Thunder’s recent redistribution of usage has brought them to where they are today, having eliminated the highest defensive rated team in NBA history and standing one win away from knocking off the best regular season team in NBA history. Cleveland’s success this season, particularly against Oklahoma City, has come with controlling the tempo and limiting the Thunder possessions when the two teams have met. The Cavaliers hold a 2-0 regular season record against the Thunder this season and did an incredible job of containing both stars in the two outings. In terms of a seven-game series, the Thunder’s high usage and uneven balance may work in the Cavs favour as they’ve now grown accustomed to containing two superstars who are ball dominant players in Kyle Lowry and DeMar DeRozan in the previous series. Even though Lowry and DeRozan are lesser players than Durant and Westbrook, the Cavaliers will still lean on their experience of containing multiple offensive superstars at the same time during a series. The lopsided usage will allow the Cavs to lock in on both players, and even though they might not be able to contain both, consistently limiting one of them may create an advantage the Cavs need in the series.

As for the Golden State Warriors, they pose a different challenge. Even though a championship will be on the line, the Warriors still believe in their bench and depth to contribute to important series wins. Much like the Cavs, the Warriors love to share the ball and their usage rates display this. Even though they have their own respective stars, the Warriors use every piece in order to give them something extra. The difference, however, between the Thunder and the Warriors is not just their balance, but also in their star player approaches. As we’ve established, the Thunder have two superstars who will dominate the ball, however in Golden State, they take a different approach.

Stephen Curry and Klay Thompson are their main stars, but Klay’s usage percentage is significantly lower than Steph’s. With Klay playing more off the ball, his role as a secondary star focuses on being a dead-eye shooter. In fact, Klay Thompson’s usage is actually closer to other star role player, Draymond Green, who also dominates the ball and carries the bulk of facilitating for the Warriors. In this approach, it outlines how imperative it is for the Cavaliers to pay extra attention to Stephen Curry. If they limit Steph, it’s unlikely the Warriors will have enough firepower to beat the Cavs without his heavy influence. The Thunder have done a brilliant job in the Western Conference Finals of making him work defensively and playing him extremely tight and physical. This has affected his offensive game, which in turn, has affected the Warriors as a whole.

In truth, the Cavaliers have the personnel and capabilities of dealing with both opponents. Unlike last year, they have an entirely healthy roster to help them achieve their goal of an NBA championship. The Thunder and Warriors are high-powered offensive units, but the Cavs have transformed into one also. Both are equally formidable, but the Cavaliers hold distinct advantages over both in their own right.

Firstly, if the Cavs face the Thunder, the will hold home court advantage. This is significant because the Cavaliers are undefeated at home in these playoffs, and look like an unstoppable force in Cleveland. Secondly, unlike either team, the Cavaliers hold the ability to control the tempo and limit opponent’s possessions throughout a contest. The Thunder and Warriors thrive in transition points, and with the Cavs hot shooting and ability to execute in the half-court offense, it will limit opportunities to get out and run. In doing this, it will also force both teams to make other roles players contribute more than they’re accustomed to, as playing with fewer possessions and a slower tempo encourages this.

The evenly spread out usage percentage between the three sets of players supports this, as all members of the Cavs Big Three holding the closest and even percentages. This is vital because with the Thunder, and a lesser degree with the Warriors, it is very realistic to limit one of the two central superstars. However with the Cavs, it’s almost impossible to stop all members of the Big Three at the same time. In this, the Cavs have a smaller window for scoring droughts compared to the other two teams throughout a series.

Lastly, the Cavaliers still have the best player in the world. LeBron still has the biggest impact on the floor in any playoff series and is definitely on a mission. It’s very hard to see him losing another NBA finals with a fully functioning supporting cast who understand and execute their respective roles. If the Cavs stay true to their usage and balance, as well as continuing to ride with the King, the city of Cleveland could well hold the Larry O’Brien trophy when it’s all said and done.

*Stats via nba.com/Stats and Basketball-reference. Usages measure how often the player on the floor is involved in the play.