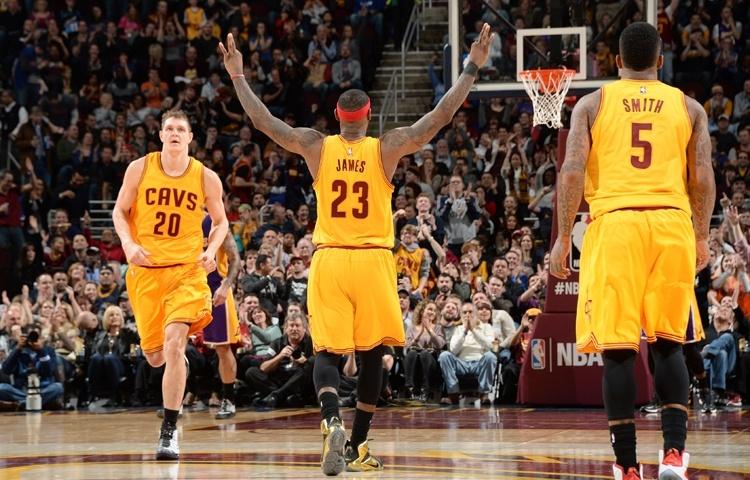 What a difference a year makes.

Nearly a year ago to the day, the Cavaliers lost to the Los Angeles Lakers 119-108 in a game which Nick Young twisted his left knee, Chris Kaman fouled out, and Jordan Farmar left the game with leg cramps. The Lakers were down to five available players when Robert Sacre fouled out late in the fourth, but was forced to continue playing because the Lakers were out of active and available players. The Lakers were enforced a technical on every Sacre for the remainder of the game and the Cavs still lost by double digits.

It was the last game of the Chris Grant era as the general manager was fired the next day. David Griffin, who was the assistant general manager at the time, was hired as Grant’s replacement and became the architect of the Cavs’ team people are witnessing today.

The Cavs 120-105 win over the Lakers didn’t start off too well. The Cavs’ defense was inefficient to start the game as they lacked energy and effort, allowing a Laker team without Kobe Bryant and Jordan Hill to score 28 points in the first quarter.

The Cavs woke up in the second quarter and started to resemble the team that was playing fun basketball during their 12-game winning streak over the past two weeks.

32 seemed to be the magic number for the Cavs on Sunday as they scored 32 points in the first, second, and third quarters to go along with Love’s 32 points.

Erasing their poor performance in the first quarter, the Cavs played one of their best team basketball games of the season. Of their 26 fields goals in the first half, 19 of those were assisted. Kyrie Irving and LeBron James both had six assists at the half.

James is accustomed to getting teammates involved and being a total team player, something Irving is effectively learning to do. Irving, who has been known as a selfish player early in his career, is starting to get his teammates involved and evolving into a total package point guard under James. However, there is something James and Irving know how to do very well: score.

James, who was two assist shy of a triple-double, had 14 of his 22 points in the third quarter and Irving contributed with 15 of his 28 points in the second half. Cleveland’s Big Three double-doubled as James had 22 and 10 rebounds, Irving had 28 and 10 assists, and Love had 32 and 10 rebounds in the victory.

As a team, Cleveland shot 55% from the field, including 18 three pointers. What makes it even more impressive is that the sharpshooting J.R. Smith didn’t knock down a single three-pointer tonight.

With today’s victory, the Cavs are now 32-21 for the season compared to a year ago when they were 16-33. Despite all of the rumors of player mutiny against David Blatt, their 5-7 record to start the season, the rumors that Love would leave Cleveland for LA, or James’ two week absence, the Cavs are who many thought they would be: a championship contender. After the game Love was once again asked about the possibility of landing in LA this upcoming offseason:

Kevin Love was asked if he'd have interest in the Lakers: "I'm a Cleveland Cavalier." Any scenario where the Lakers would be an option: "No"

So whenever the Cavs go on another losing streak or a teammate yells at another for not picking up a defensive assignment, just relax. If there is one thing to take away from a meaningless victory over the Lakers in early February it is this: Enjoy the ride, because anything is better than last season.

The newest members are getting into the groove. First, Irving finds a cutting Mozgov for the slam:

Later in the game, Irving finds a cutting Shumpert for an impressive alley-oop:

That chemistry we all expected to see around this time of year? We’re getting glimpses of it demonstrated here: