From Deep in the renovated Q: Quicken Loans Arena set for major renovations in hope of future ASW 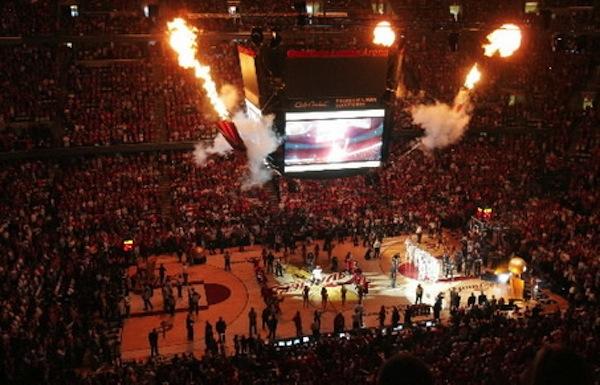 Our beloved Quicken Loans Arena, home of the Cleveland Cavaliers, is set to be revamped to the tune of $140 million dollars. The update to ‘The Q’ is set to dramatically change the aesthetics of the arena with a glass exterior and public gathering spaces and dining areas that let you watch the game while you eat. The renovations are said to be completed by 2020, with the arena staying open during the construction.

The Q is the second oldest arena in the NBA at 22 years of age, only surpassed by the Utah Jazz and their Vivant Smrt Home Arena which stands at 25 years old. The update is set to help the Cavs in their bid for an upcoming All-Star Weekend. The Pelicans are set to host this seasons events in New Orleans, the Lakers have landed themselves the 2018 slot, while Michael Jordan and the Hornets will likely get the first shot at hosting the 2019 ASW. Low and behold, 2020 is up for grabs and the arena is set to be completed by that time. Dan Gilbert and the Cavs had previously expressed an interest in hosting an All-Star Weekend during last seasons NBA Finals, but were told by NBA commissioner Adam Silver that a renovation at Quicken Loans Arena was needed to be considered.

The Cavs have created a website detailing all of the plans for the upgrade, theqtransformation.com. According to the sites plans, the Cavs will split the $140M cost 50/50 with the local government, with the Cavs also extending their lease until 2034. Cuyahoga County will borrow the $140 million up front by selling bonds to investors. But when anybody borrows money, interest piles up, meaning paying off the loans will take until 2034 and cost approximately $244 million.

These new renovations won’t just impact the comfort of Cavaliers games, it will bolster the city’s opportunities to host more worldwide talent on the entertainment front. Regardless of all of the technicalities, the best news to come from this is the confirmation that our Cavaliers will remain in The Land until at least 2034. Austin Carr, your Cavs will soon be shooting from deep in the renovated Q.