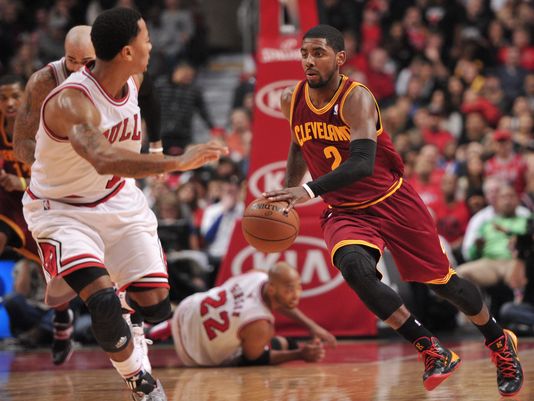 We’ve reached that happy time of year, when NBA action has begun (albeit preseason) and every team seemingly has limitless potential. The Wine and Gold were the first team in the central division to hit the hardwood when they hosted Maccabi Tel Aviv a week ago at Quicken Loans Arena. The game was undeniably very special for first-year Cavaliers head coach David Blatt, as Tel Aviv was the team he coached for the last four years (culminating in a victory in last year’s Euroleague Championship). There is little doubt that Coach Blatt was pleased with the results of his first game at the Q.

The Cavaliers played well in their first action of the 2014-15 season, downing Maccabi Tel Aviv 107-80 in a balanced, team effort. They were led offensively by Kyrie Irving (16 points & 5 assists) and defensively by Anderson Varejao (15 rebounds, 1 steal, 1 block). LeBron scored 12 points in 2 quarters of play, opting to sit out the second half. The Cavaliers started the game slow in the first quarter but quickly shook of the rust, building a 15-point lead by halftime and never looking back thereafter. Offensively the Cavs did a good job of moving the ball around and finding the open man, especially on fast breaks. This season will undoubtedly give the Cavs a multitude of opportunities to run in transition after both missed shots and steals, something they did well Sunday. They also did a phenomenal job from the charity stripe in hitting 21 of 22 as a team. Though the Cavaliers played well, they left some room for growth. They did a great job rebounding the ball all game, but could have done a better job of closing out defensively on Tel Aviv’s shooters. They also need to figure out how best to use their talented big men effectively, as each has different strengths and weaknesses. When they took on LeBron’s former team, the Miami Heat, last Saturday in Rio, Brazil, the Cavaliers played significantly more complete defense, gaining and sustaining a large lead for the first 36 minutes of the contest with the first unit. They’ll have five more contests to tighten up defensively before the start of the regular season on October 30th.

The Chicago Bulls also recently kicked off their NBA season after a similarly-exciting offseason. The Bulls signed all-star forward Pau Gasol this summer to join (reigning Defensive Player of the Year) Joakim Noah and Taj Gibson in the Chicago frontcourt. That, when coupled with the return of MVP Derrick Rose, has given many in the NBA reason to believe that the Bulls just might have a special opportunity to win it all this season. The Bulls opened their season the night after the Cavaliers did theirs, hosting the Washington Wizards at the United Center in Chicago. The night would end with a Wizards 85-81 victory, led by Glen Rice and Marcin Gortat. Bulls rookie Nikola Mirotic led the bulls in scoring in his first NBA game, finishing with 17 points and 5 rebounds. The story of the night had to be Derrick Rose looking like his old, explosive self on the way to 11 points in two quarters of play. His rejuvenated play certainly gives hope to basketball fans everywhere that D-Rose has finally returned:

{adinserter 2}The next night, the Bulls traveled to the Palace at Auburn Hills to play the Detroit Pistons. This game similarly turned out to be a tight contest, but ultimately ended with the Bulls losing 111-109 in overtime thanks to the dominant play of Detroit’s Greg Monroe. Derrick Rose finished 0-4 from the field in two quarters of play, yet finished with 6 points thanks to a 6 for 8 shooting performance from the free-throw line. While he didn’t score from the field (something that also plagued him in the recent FIBA Basketball World Cup), Rose still looked as explosive and elusive as ever.

In both the Bulls’ losses, there were many things they did well. In both contests they shot the ball better than their opponent from 3-point land and were successful from the charity stripe. They also did a good job of scoring on fast breaks, something that is vital to any team’s success. They also have some shortcomings in preseason thus far. Chicago was out rebounded in both games, something that simply shouldn’t happen considering the fact they have one of the best frontcourts in the league. Another area they must improve in is scoring points in the paint, something they haven’t done a good job of thus far in preseason. They have been outscored in the paint 44-84 in the two games thus far, something that has to be improved upon in the Bulls’ remaining six preseason games.

Although it isn’t a large sample size we are beginning to learn about these two central conference juggernauts based on their play thus far. The Cavaliers have played great offensively in the paint, out rebounding both teams a combined 108-76. These areas are exactly Chicago’s weaknesses up to this point, yet they have more than enough talent and coaching to overcome them. The biggest discrepancy between the two teams comes down to health. The Cavaliers are relatively very healthy with few players coming back from serious injuries. The Bulls on the other hand have two important players on their roster coming back from serious surgeries. Derrick Rose is coming off his second major knee surgery and Joakim Noah is coming off a knee surgery of his own. Both must both heal and play at a high level for the Bulls to contend for the Eastern crown let alone a champion.

If the season ended today (as crazy as that sounds) the Cavaliers are a step up on the Bulls. But thankfully for Chicago, and every basketball fan really, the season is just getting started.