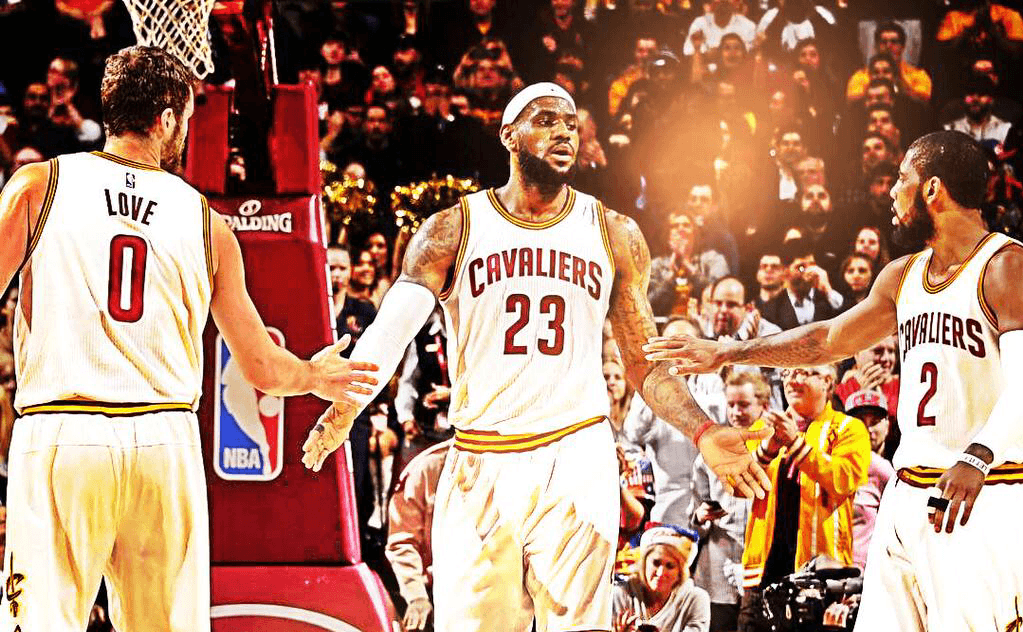 The Cavs have arguably one of the top 3 rosters in the league, when healthy. Their depth chart has, well, depth, and some might even say that the Cavs second unit could give a team or two (like the Sixers) a run for their money. But the personnel changes a bit once the focus shifts from overall play to offensive play. There may be times in this coming season that the Cavs need scoring, desperately. While the burden could be put upon the Big 3, it doesn’t hurt to put the best offensive players in the game together to run the score up. Blatt might want to consider a lineup consisting of Kyrie Irving, J.R. Smith, LeBron James, Kevin Love, and Timofey Mozgov.

Kyrie Irving is a no-brainer here. Known for having arguably the best handles in the NBA, Kyrie came into the league as an offensive force, dating back to his single year at Duke. Kyrie dribble-penetrates like no other, and his handles are out of this world. His 1-2 crossover move is sure to send the defender in the wrong direction, and his expert ability to finish off the glass makes him one of the most dangerous and crafty offensive point guards in the league. He also had a career high 55 points, which was followed up by another career high of 57 points last season, and it is fairly certain that those performances can be repeated this season. He’s a threat to put up huge numbers on any given night.

Kyrie also won the 3-point contest a few seasons ago, so you know he can drain it from deep. Irving finished last season averaging 21.7 points per game, good for ninth in the league, with an effective field goal percentage of 53.2%, also good for ninth and 11th in the league, respectively. These statistics speak for themselves. Yes, it is more than likely that Kyrie does start the season on the bench while recovering from surgery, but he is still one of the Cavs best, if not the best, offensive weapons.

We started to see the true potential of J.R. Smith last season following his trade to the Cavs. Immediately inserted into the starting lineup, Smith put up 12.7 points per game with a 55.5% effective field goal percentage, which is good for second on the team after Mozgov. His shooting perfectly complemented LeBron and co., spreading the defenses out to the corners of the court. His deadly three-point shooting helped to open up the paint for his teammates, who saw less double teams with him on the court. And most importantly, he played team ball. He configured his offensive playmaking to complement the big 3, which brought him much success. It is possible that Smith has not yet reached his basketball ceiling, despite the fact that he’s already 30 years old. Shump’s surgery recovery opens up the starting SG spot for J.R., and it’s safe to assume that he’ll try to show the coaching staff that he deserves the starting spot long-term through his play. Either way, Smith is the go-to option at the shooting guard position.

While LeBron James has become an elite defender, especially in the past 5 years, his super-athletic build makes him equally deadly on the offensive end of the court. A large factor of a player’s success on the court depends on his basketball IQ, and James; basketball IQ is out of this world. His teammates have told reporters on multiple occasions that he knew not only his plays, but he also knew every single play and what every player’s movements should be for every single play. Although he didn’t win the MVP last season, LeBron is still the best player in the league right now in terms of overall playmaking and ability to make a difference in a game.

He’s already 31, yet it seems as if he has not yet reached his peak. James averaged 25.3 points per game last season, third in the NBA to only James Harden and Russell Westbrook. While Westbrook and Harden scored quite some points from shooting 3’s, James earned most of his points the hard way, driving to the basket. This just shows how great LeBron is. Additionally, James had an effective field goal percentage of 53.5%, which is very, very good considering the times when he has to take over a game and shoot shot after shot. James told reporters that he wanted Love to be more involved in the offense, and it seems like LeBron has a similar mentality to the focus he had following the Heat loss to the Mavs in the 2011 NBA Finals. In his final season with the Heat, he had an effective field goal percentage of 61%, which is out of this world. We might witness another efficient scoring season from LeBron, who has admitted that he does not enjoy shooting the ball at a high level. Regardless, he is a player that any coach would want on the court playing for their team.

In his first season with the Cavs, Kevin Love’s numbers took a bit of a dip. His scoring dropped to 16.4 points per game, and his effective field goal percentage went down from 52.4% to 50.9%. But that doesn’t mean that Love’s already past his peak. In Minnesota, Love was virtually playing with D-Leaguers, which forced him to perform day in and day out. Now on a loaded Cavs roster, Love can afford to take time off, to pass the ball, because he has trust in his teammates. Whether he enjoys it or not, Love’s shooting increased from beyond the arc, despite shooting less overall threes than in his last year on the T-wolves. Love is similar to JR- his ability to shoot the 3-ball spaces the floor and creates problems for defenses. Additionally, he takes one of the opponent’s big men out of the paint, creating a gap for his teammates. Love is also well-known for his rebounding, and he is gifted with great offensive rebounding. He’s not as good at O-boards as Thompson is, but he’s pretty darn good considering his role on the team. With Kyrie and Shump out for the beginning of the season, Love should get more touches and more shots. During Cavs Media Day, LeBron talked about making more plays centered around Love, integrating Love more into the offense. This should boost Love’s numbers offensively, and they should come closer to his numbers from his Minnesota days. Love is by-far the best offensive power forward on the roster, and also the best overall power forward as well. Thompson is great on defense, but he can’t score like Love can.

Mozgov, like JR was another mid-season acquisition made possible by GM David Griffin. Also, like JR, Moz was inserted into the starting lineup immediately, helping the Cavs to their season-best stretch in which they won 30+games and lost only 5. Not that Varejao wasn’t a starting-caliber center, but Moz instantly bumped the team to a new level, especially on the offensive end of the court. His ability to play the pick-and-roll so well with Kyrie and LeBron created easy layups and dunks. Mozgov averaged 10.6 ppg, while shooting 59%. These numbers aren’t exactly eye-popping, but they’re pretty good for a center playing on a team with a big 3. Cavs fans also got a glimpse of Mozgov’s handles, as he got creative under the basket, even at one point making a reverse pump fake layup on a transition basket. Mozgov alone isn’t very good offensively- but put him with this group of guys, and he’s one of the best centers you can find to complement the others.

There’s also other players to consider, especially Mo Williams. He had a career high 52 point game last season against the Pacers, so he isn’t exactly declining in production. Additionally, with the injuries to Kyrie and Shump, Mo will see extended playing time especially at the point. Even once Kyrie comes back, Mo can join him in the backcourt playing SG, as he did next to Kemba Walker last season. Overall, the entire lineup of Kyrie, JR, LeBron, Love, and Moz, all had a true shooting percentage of over 56%, which helped the Cavs to the 3rd highest offensive rating in the league last season (111.1 points per game). Of the Cavs players in Blatt’s rotation last season, these 5 players all had plus numbers for their offensive box +/-, showing that they really performed on offense. This group of 5 played a little over 480 minutes together last season, and they had the highest difference in field goal percentage compared to opponent field goal percentage of all of the lineups the Cavs played. They also outscored opponents by an average of 20.7 points per 100 possessions, tops for all Cavs lineups. While this lineup is clearly talented on offense, they also held their ground on the defensive end. Look for this lineup to be the main feature next season, with hopes of building off of an already great ‘14-’15 season. 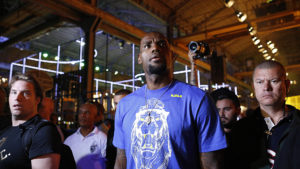 JUST IN: LeBron James Success Has Rubbed Off On His Friends
Related TopicsCleveland CavaliersLineupOffenseStarting 5