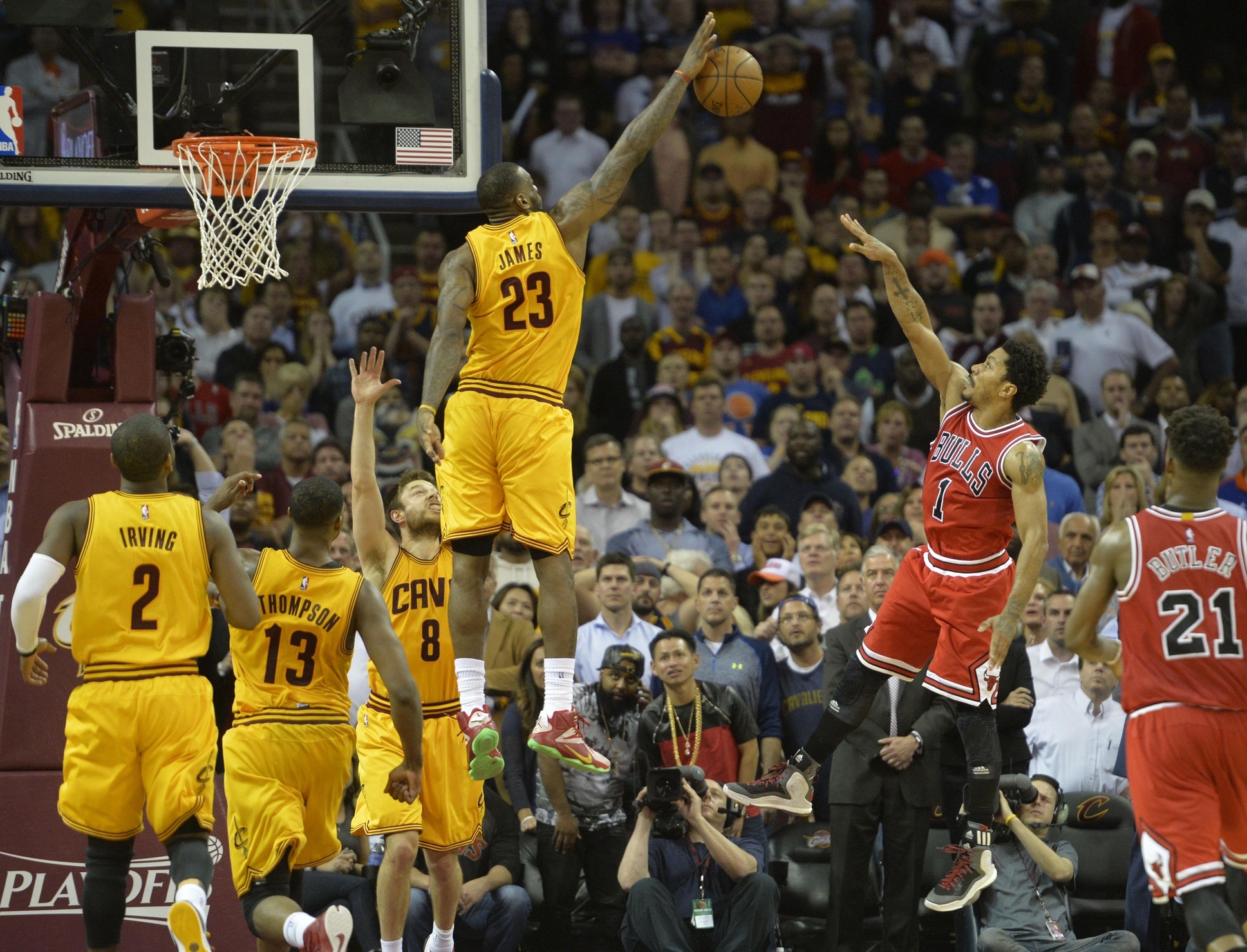 There’s a well-known saying in basketball that great defense leads to great offense. Many coaches in the league are defensive minded, believing that the offense will come naturally from great defense. The Cleveland Cavaliers played decent defense last season, but they also struggled in some ways. While ranking 10th in terms of opponent three-point field goal percentage, the Cavaliers allowed opponents to shoot over 40% from midrange, which was in the lower third of the league last season.

Overall, though, the Cavs held opponents to an average of 97.94 points per game, good for 10th in the league. With the core players all remaining on the Cavs, the team should be able to continue where they left off. Their defense should improve even more, to top five in the league, especially once Iman Shumpert and Kyrie Irving return to the lineup.

With Tristan Thompson and the Cavs currently at an impasse in terms of contract talks, he wasn’t included in this conversation. He might as well be a better defender than Love, but he simply cannot be included in this article because, technically, he isn’t a member of the team.

When healthy, the Cavs’ best defensive lineup should be Kyrie Irving, Iman Shumpert, LeBron James, Kevin Love, and Timofey Mozgov. But for the beginning of the season, with Irving and Shumpert still out, the Cavs should entrust Mo Williams and J.R. Smith with the responsibilities. Let’s breakdown these choices and see why they deserve the nod for the defensive starting five.

The return of Mo Williams to the city of Cleveland was a great addition by the Cavs as Kyrie Irving’s injury in the playoffs exposed their lack of backcourt depth. Williams will backup Irving, but will start for the time being as the latter is recovering from an injury. Williams gets the nod for this defensive starting five because he brings both veteran leadership and knowledge to the team along with great chemistry and understanding of playing alongside LeBron James.

Yes, Matthew Dellavedova was, in some ways, the team’s savior in the Finals, but the Aussie Pitbull has not shown, on a night to night basis, that he is reliable. Mo is already 32 years old, but he moves around the court like a player in his mid-20s. Given that Williams definitely has things on the offensive side of the court figured out, we should see him put extra effort on the defensive end to balance out his playmaking.

He’s also on the shorter side, listed at 6’1”, but his ability to move around the court with ease should help him keep up with the elite guards in the game today. Cavs fans probably have a vision of the old Mo Williams from the old Cavs teams, but this new version of him will be an even greater compliment to the team. As a journeyman, he has gained the ability to shift his playing style to fit the teams that he is on, and he should, and will, do the same for this new Cavs team.

Kyrie Irving’s season-ending injury in Game 1 of the NBA Finals was heartbreaking for Cavs fans. The addition of his injury to Kevin Love’s injury really killed all chances the Cavs had to win the Finals. Officially, Irving is out until January, but he might be able to make a return just in time for Christmas. Once he gets back to his original form, we should see Irving continue to perform on defense. Last season, he finally understood that playing with LeBron James meant no sleeping on defense.

Irving came out and played solid defense, and after one season, he became underrated on that end. Yes, his offensive abilities are through the roof, and he still dozes off on defense one or two times, but James’ guidance should help him improve his defensive ability. Being a young individual, Kyrie Irving still has a lot of time to learn, and he will get even better on defense.

Look at LeBron James, he came into the NBA in 2003 with lackadaisical defense. Over the years, he really began to work on his defensive game, and now he is one of the league’s best. Kyrie Irving has the ability to do the same and having guys like Shumpert and James on the roster will definitely help foster his growth.

The obvious surprise of this lineup is J.R. Smith. Even though he is only listed because of Shumpert’s injury, throughout the years, Smith has always had the tools to succeed on defense. On offense, he has been known for his flamboyant playing style with his flair for contested jumpers, deep threes, and emphatic dunks. But the defense and his name are rarely, if ever, used in a sentence together.

This changed last season, Smith’s first in Cleveland. Opposed to his previous seasons on the Knicks’ roster, the Cavs were, and are, expected to be contenders, and contenders need solid defensive effort to win games. He knew that he needed to step up his defense in order to remain a starter, so he worked on it throughout the season. It also helps to have a good working relationship with LeBron James and this became a positive influence to his all around game.

Although it’s hard to notice, J.R. Smith really stepped up on defense, playing harder on that end than ever. The winning environment definitely helped his mentality, seeing that he learned an important aspect of basketball that not all players understand: Great defense leads to great offense. While Smith’s defense isn’t quite near Shumpert’s level, he is still good enough to be the next man up. 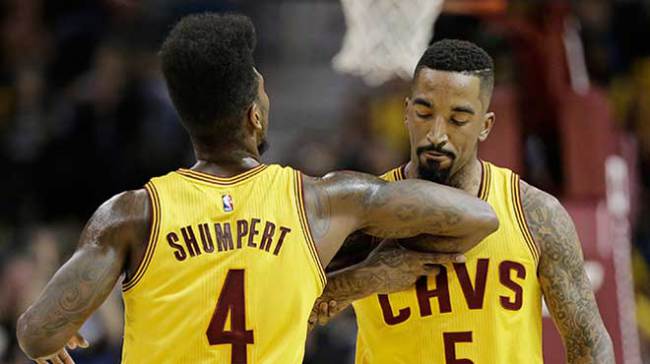 Once Iman Shumpert returns from the injury to his right wrist, he should be able to reclaim his righteous spot in this defensive lineup. From the start of his NBA career, Shumpert has been known for his lockdown perimeter defense. The Knicks drafted him for that exact reason, even labeled him as a “Dwyane Wade stopper”, and he was a great compliment to offensively minded players such as Jeremy Lin, and later on, Jose Calderon, in the backcourt.

Shumpert has had his fair share of injuries in the past few seasons, and this explains why he wasn’t able to completely find his new identity on this Cavs team last season. Although he won’t make his return to the court until 2016, Shump was, and still is, arguably the best perimeter defender on the Cavs’ roster. His quickness with his hands and feet, along with his high vertical, make him a defender that no player wants to go up against.

As a member of the Knicks, Mike Woodson often put Iman Shumpert on the opposing team’s best offensive player, but David Blatt has yet to do that. The Cavs might actually begin to do this during this coming season, once the hard-nosed guard gets more accustomed to the Cavs’ defensive schemes. While Kyrie Irving has become a decent defender, Iman Shumpert is still the defensive dynamo of the Cavalier backcourt. This would allow the Cavaliers to match up well against a team like Oklahoma City, who has both Russell Westbrook and Kevin Durant on the roster. LeBron James and Iman Shumpert could match up well against the Thunder duo, putting less pressure on Kyrie Irving to play defense.

Enter LeBron James. He’s most famous for his chase-down blocks off the backboard, but he has a very complete defensive skillset. He has a whole toolkit of skills that he uses to shut down opponents. He can defend the perimeter, defend the paint, rebound, block shots, play the passing lanes, and more. This makes James an obvious entry to the Cavs’ defensive lineup.

Honestly, the only way for his defense to get better is for his teammates’ defense to improve. If they can play great defense as a unit, it will make LeBron James’ defense seem even more scary. He also had a team-best 2.9 defensive win shares, making him the best defender on the team, statistically. He slacked off at times last season, but he was still figuring out the team’s identity. Now that their identity is known, the Cavaliers will definitely put more mphasis on defense, with LeBron James leading the way.

Kevin Love is also a big surprise for this defensive lineup. He was viewed last season as a horrible rim protector. Despite this, Love actually had improvements on his defense last year. Watching him play, it was clear that he really tried, and actually wanted to make an impact on that side of the court. Critics can continue to view him as a poor defender, but the only way for him to prove them wrong is through his play. Kevin Love and LeBron James have both stated that Love will be featured more on offense, and this could have a trickle-down effect on the defensive end. Now that Love has some experience playing with his teammates, he should be able to focus more on defense and his teammates will only make him better.

Dig this, the partnership of Kevin Love and Timofey Mozgov bested any frontcourt duo that the Cavs had last season defensively. Opponents averaged a measly .177 free throws per field goal attempt every time the two big men were together on the court.

Now comes Timofey Mozgov, who arrived in Cleveland in early January, gifting the Cavs a late Christmas present consisting of solid defensive and offensive play at the center position. Anderson Varejao was a gifted center, but could not really command the paint like Mozgov does. His 7’1” frame allows him to impact shots in the paint, and his length enables him to block shots with ease.

Yes, Mozgov is notable for his offense, but he is also very capable on defense. He is one of the large reasons that the Cavs were able to go on a huge winning streak following the All-Star game. The Russian center has that fire in his eyes; that look of competitiveness. He never gives up on a play, and there were numerous times where he has been rewarded on the offensive end following a block or steal. There’s really no competition from the Cavs’ roster for the starting center spot as Mozgov has it on lock.

Overall, the Cleveland Cavaliers will have a great team in terms of defense. What J.R. Smith and Mo Williams may lack, they make up in terms of height and speed, respectively. LeBron James will continue being himself, and Kevin Love will return with a refreshed defensive mindset. Timofey Mozgov might be too slow to guard small-ball lineups, which will send him to the bench. But for the most part, he will be there to disrupt opponents’ penetrations. Ultimately, defense wins championships, so the defensive playmaking of the Cavs will play greatly into whether the team can make a return to the Finals once more. We’ll just have to wait and see. 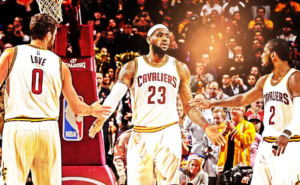