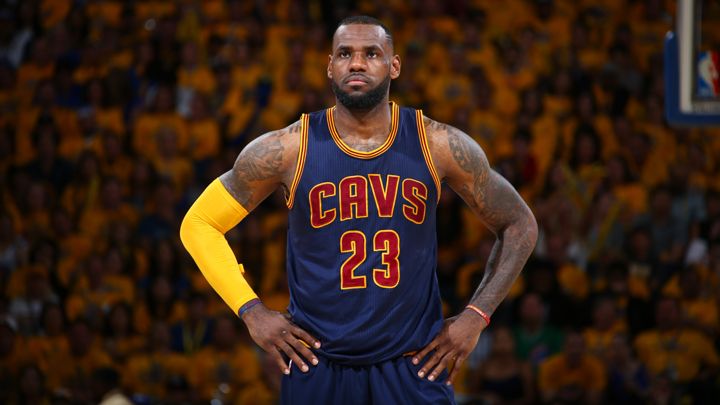 Let’s get real. LeBron James is one of the greatest of all time, and still makes a very compelling case for the best player in the NBA at this moment. This being said, he is on the wrong side of thirty, and not getting any younger. With his physical style of basketball, his dominance may be weaning and within the next three to five years, it wouldn’t surprise me to see LeBron taking on a role similar to that of Kevin Garnett in Minnesota, starting the game but not playing starters minutes. The Cavs currently have a strong young core in Kyrie Irving, Tristan Thompson, Kevin Love and Iman Shumpert, however there options at the small forward consist of LeBron, James Jones and Richard Jefferson, both of which are signed to veterans minimums and will be out of the league even before LeBron, meaning over the next several years it would be best to find a young replacement. LeBron is leaving big shoes to fill, and it would be best to get someone who LeBron could mentor for the next several years before taking the starting job. Here are some of the top prospects and youth in the league that Griffin might want to take a look at.


Tobias Harris:
It looks like Tobias Harris has found a home for himself in Detroit. Harris was always a personal favorite of mine; young and an excellent athlete with little doubt for success in the Van Gundy system. If by some chance Harris finds Detroit a poor fit, perhaps Cleveland could make an offer, though the chances of that are quite low.

Jabari Parker:
Is Jabari Parker good? His points are slightly down from last year’s short campaign and he average’s a solid role-players 11 points, four rebounds a game, this being said he has to share the floor with Giannis Antetokounmpo which raises an opportunity for the Cavs. Rumors of his availability have surfaced, however more likely the Bucks will play out the season and see what they can get from him in the off season. If LeBron is willing to take a Tim Duncan, aka a pay cut for the sake of the team, Cleveland may just be in the running to sign Parker when his rookie contract runs out.


Ben McLemore:
What if the Cavs embrace the small ball revolution to a new level? Why even run a small forward when you can pair three guards with K Love and TT. That would be the thought process behind picking up McLemore. Shumpert is expected to be the starting Shooting Guard within the next year, but there is potential to see McLemore to take on a scoring role with his high athleticism and three point prowess. The Cavs have been linked to McLemore in trade talks over the past several weeks and if a trade doesn’t go through before the deadline look out for the Cavs to attempt and sign McLemore on a Taxpayer MLE when he becomes a free agent.

Derrick Williams:
Contrary to current beliefs, Derrick Williams’ stand out achievement in my mind is that he found a way to pair with Kristaps and keep the Knicks somewhat relevant while Melo was out back in December. He may not be the premier small forward in the league, but maybe that’s not what the Cavs need. By playing more of a supportive role, Williams could allow for Love and Irving to get more touches, a responsibility they’re going to have to prepare for over the next few years. The biggest challenge to signing Williams is that he is actually a proven commodity, however, if the Knicks are able to land Kevin Durant in the next offseason or so, Williams, already playing for his third team in four years, may become available in free agency.

Sir’Dominic Pointer:
There’s a lot to look forward for the Cavs’ draft prospects, which Cleveland picked up in the previous draft, mainly just for their names. Pointer is a shooting guard first, but is large enough to play the small forward occasionally and brings versatile defensive skills averaging at least 1 block and 1 steal per game in the NBA D-League. Pointer is an interesting case where he could very much develop into a solid NBA role-player or he could end up being a huge flop, only time will tell.

Ronald Roberts:
So here’s the thing about Roberts, he’s pretty good. Honestly he could be a garbage time, fringe rotation player on a non-contender already. It’s his rookie season and he’s already playing full NBA minutes, while putting up 18 points a game shooting at .617%. He unfortunately does not have a three point shot. Like literally none. Still he pulls in around 11 rebounds a game and gets 1.5 blocks while he’s at it. Roberts’ biggest problem when it comes to pulling him as a prospect? He plays for Toronto’s 905 team, and there’s a good chance they’re going to want to keep him.
International Prospects:

Cedi Osman:
Even before you take his impressive stats, drive and young age into consideration, Cedi Osman has one huge advantage in my mind, his nickname is Jedi! Like, how cool is that! Osman was drafted 31st overall in the previous draft, and has openly supported the Cavs decision to draft him and hope to come over as soon as his contract expires. Cedi sports a somewhat terrifying .524 three point percentage shot, and while only taking two to three shots a game, those numbers are still insanely high. Osman has some work to do, only shooting around .700 on free throws and isn’t used to playing more than 20 minutes a game, however under LeBron’s tutelage he is my prediction for the Cavs most likely successor to the Kings legacy. And once again, his nickname is Jedi, so consider that.

Tomas Dimsa:
Dimsa is a bit of an unknown. At only 22 he shows tremendous upside however he plays the shooting guard position (are you seeing a trend yet?). He has a championship pedigree already, winning silver and bronze in the U-16 and U-19 championships respectively. He’s slightly undersized at 6’5, but his 181 weight could be bulked up, giving him more of a chance to dominate the paint. Dimsa has already been named a member of the Lithuania national basketball team at 22, and his team’s director has stated that Dimsa will be seeing more play time over the next season.


Khavon Moore:
The biggest issue with analysing high school prospects is it’s almost impossible to tell what they’ll turn into. With the CBA requiring at least one year since graduating high school time plays a factor. Some players may fizzle out, while others could end up outside of a team’s pick range. This being said, Khavon Moore looks like the small forward of the future. Both Moore’s shooting and passing are ranked as Excellent, and his strengths are three point shooting, smart passing and scoring on all three levels. He is still small for his position, only 185lbs, but that is something he can work on in college. I wouldn’t be surprised to see him making waves at a major college in the next few years.

LaDarius Marshall:
If Khavon Moore is the small forward of the future, LaDarius Marshall is the small forward of now. A 40 inch vertical, high motor, athleticism and agility are all packaged with a 220lbs frame with a specialty of driving to the basket. Marshall is a beast in every sense of the word. He’s a top 10 prospect who brings a natural sense of leadership with his game. Another one I would look to watch in college.

Jerome Hunter:
Jerome Hunter is a smaller name than the previous two players named, however there are a few things that make Hunter a strong option to consider. First off Hunter is from Columbus, meaning he has the home town hero story going for him. He honestly looks more like a shooting guard than a true small forward, but high volume three point scoring is a top necessity when it comes to the current NBA. My biggest concern with Hunter is that he weighs 140lbs while still being 6’6, meaning this kid is literally a wire. I mean I weigh more than him and he still has 6 inches on me, but he has a few years before the draft so that shouldn’t be a huge issue. Hunter at the moment looks like the most likely player to end up in the Cavs draft range in 2018. 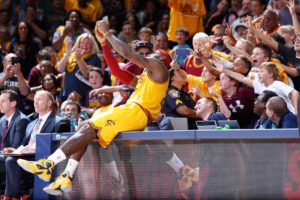 JUST IN: For Cleveland: Why we Bleed Wine and Gold
Related Topics