Position By Position Breakdown For Cavs-Bulls Second Round Matchup

Well Cavs fans, it’s the matchup we’ve all been dreading, the Chicago Bulls. At the beginning of the season, just about every analyst picked either Cleveland or Chicago to come out of the East. It seemed to be the matchup everyone wanted for the conference finals, but here we have it in the semis.

The Bulls can be a different team on any given night. This series can truly be determined by Derrick Rose’s performance. Will we get the MVP-like Rose, or will we get the knee hampered Rose? As horrible as it may be, Cavs fans will be cheering for the latter option.

They’re here, its time, let’s do this.

This is the matchup that could truly determine the series. In the quest for a title, there will be no minute’s restrictions for the former MVP, Derrick Rose. Coming off yet another torn meniscus a couple months ago, Rose put up impressive number against Milwaukee.

On the other side of things, Rose will have to compete with our very own Kyrie Irving. If there’s a point guard in this league that may actually break his ankles with a handle on the ball, it’s Kyrie.

Kyrie is young, fresh, hungry and ready to go. These Cavaliers will have had an 8 day break in between sweeping the Celtics (man that feels good to write), and starting the second round against the Bulls. LeBron has already stated he’s bored and wants to play, and this is his tenth straight year of playoff basketball. Imagine how Kyrie feels waiting around in his first ever playoff appearance.

Click ‘Next’ to see the breakdown of the shooting guards in the Cavs-Bulls Playoff series! 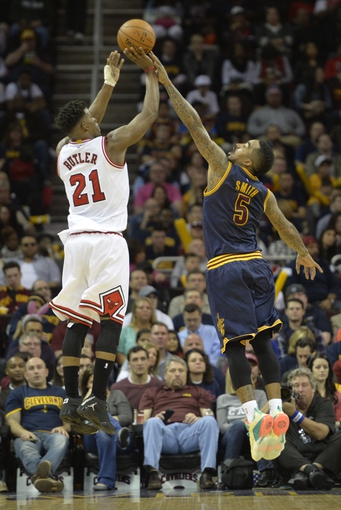 After the altercation in Game 4 in Boston, J.R. Smith will miss the first two home games of this series. Smith will be missed, he really has opened up the Cavs offense with his three point shooting. That being said, this series will likely go at least 5 or 6 games so we’ll see plenty of J.R.

The next man in line will be Iman Shumpert. Shump played 29.0 MPG in the last series, and was used to starting in New York, so it shouldn’t be a problem for him to start a couple of games. In his 29 minutes a game against Boston, Shumpert only managed to post 7.0 PPG and shot a lowly 25% from deep. That will need to improve while he’s in the starting lineup.

Jimmy Butler went from simply an elite defender, to being Chicago’s leading scorer in a blink of an eye. As Chicago’s best defender, Butler will probably be forced to check LeBron James for the majority of the series. He played an incredible 42.2 MPG in the Milwaukee series, and probably won’t see that decline against Cleveland.

Shump should fare just fine against Chicago’s go-to man. Butler shot 47% from the field against the Bucks in the first round, but against the Cavs this season he only managed to shoot 40% from the floor.

Click ‘Next’ to see the breakdown of the small forwards in the Cavs-Bulls Playoff series!

LeBron James like so many times before, has the ability to break this series wide open. James loves playing against the Bulls, and if Dunleavy is forced to guard him at times, we could see flash backs of James Johnson guarding LeBron on the elbow.

Dunleavy is a sharp shooter, he’ll come off multiple kinds of screens to get him an open look at the basket. In his three games against Cleveland this season he’s shot at a 51% clip from the floor. If the Cavs plan on winning this series, that simply has to change.

James simply loves playing against Chicago. The rivalry is well and truly alive when Joakim Noah and LeBron James face each other. In four games against the Bulls this season, LeBron averages 28.3 PPG, 7.0 RPG and 6 APG. He’ll probably see a lot of Jimmy Butler on the offensive end, but LeBron simply over-powers any defender the Bulls can throw his way.

Click ‘Next’ to see the breakdown of the power forwards in the Cavs-Bulls Playoff series! 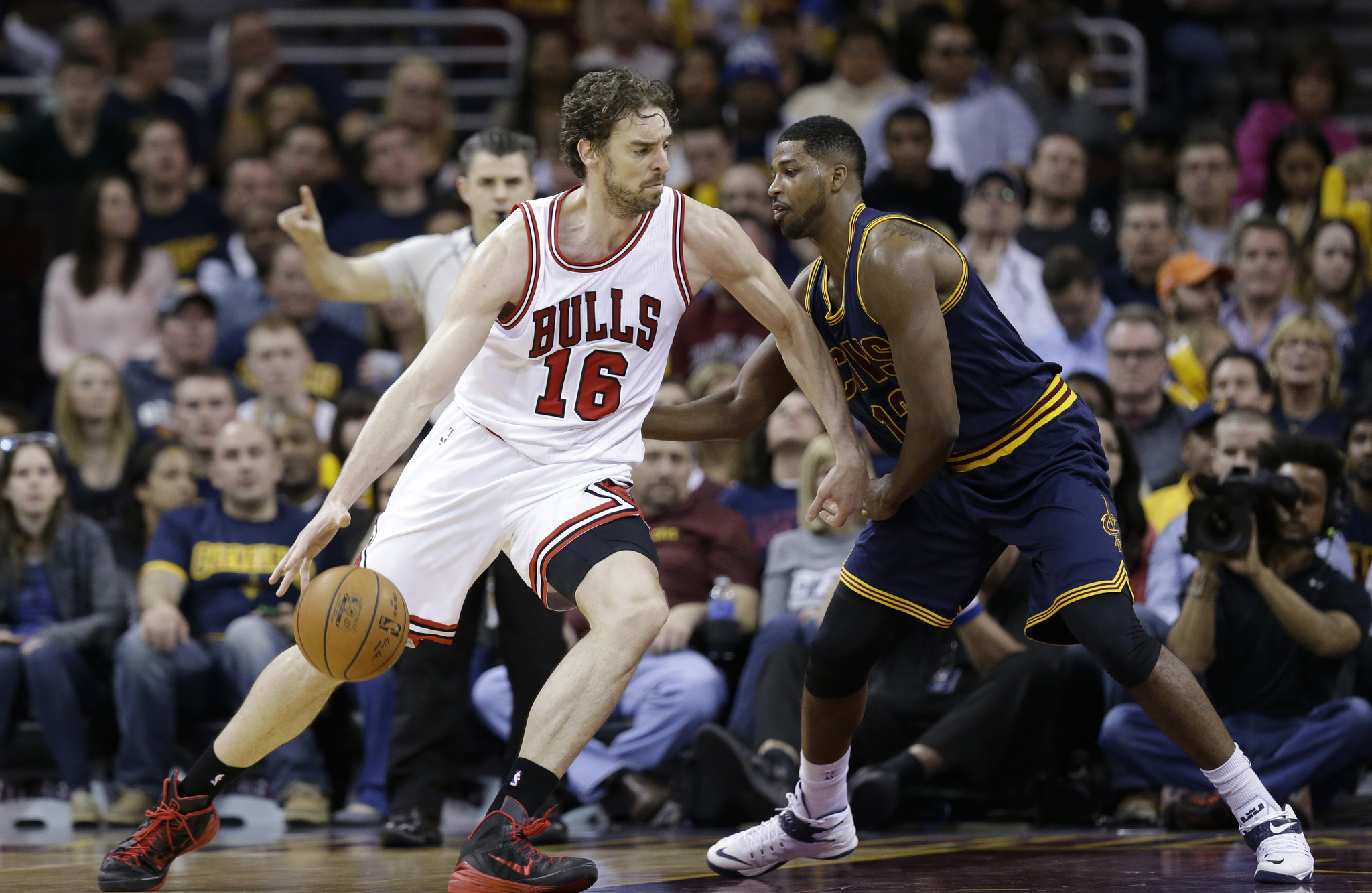 Losing Kevin Love is a huge blow for the Cleveland Cavaliers but as LeBron said, “It’s the next man up. We have guys that have been able to step up. We know it’s going to be a tough void with two of our bigger guys in our lineup and in our season so far but we got to have guys step up and we see what happens.”

Tristan Thompson may not be able to produce points himself on the offensive end as well as Kevin Love does, but he will make a huge racket on those offensive boards. Thompson averaged 3.3 offensive rebounds per game this season, but against the Bulls he averaged 5.5. Chicago will need to keep TT off the boards.

This season was a fantastic one for the former Laker, but against the Cavs he struggled. In four games he averaged just 14.0 PPG, and never shot about 50% from the floor. Gasol posted 46 games this season in which he shot above 50%, none of which were against Cleveland.

If Thompson can keep the streak of Gasol’s shooting woes alive, and force him into foul trouble with his attack on the offensive rebounds, it gives Cleveland more of a chance to pull this one out.

Click ‘Next’ to see the breakdown of the centers in the Cavs-Bulls Playoff series! 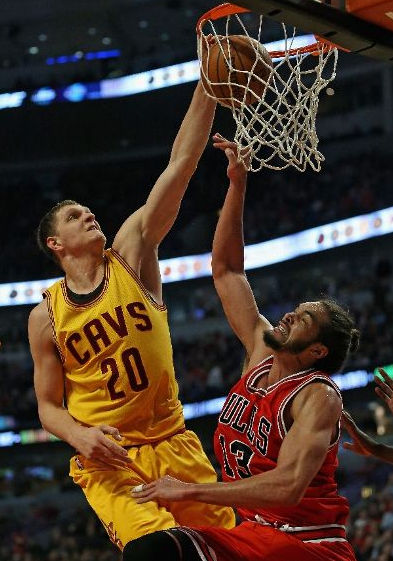 Joakim Noah. A name that should make just about every Cavs fans blood boil. If it wasn’t for Kelly Olynyk, Noah would probably be the most hated man in Cleveland right now.

You got to give it up to Noah, he’s one of the best passing big men the world has to offer. The combination of Noah and Gasol on the Bulls hi-low sets has been deadly all season. Cleveland will definitely look to limit those opportunities.

Cleveland’s big man in the middle will need to keep his cool and not let Noah’s incredibly big hands, and their clapping get in his head. Mozgov has been a force protecting the rim so far in the playoffs. He leads all players with 3.0 BPG, and that trend will need to continue. Chicago have plenty of guards that will be forcing layups, if Mozgov can send a few bac that will lead to more Cavalier fast break points.

Click ‘Next’ to see the breakdown of the sixth men in the Cavs-Bulls Playoff series!

Shump will see quite a lot time as a starter in J.R’s absence, but will assume his role as sixth man shortly thereafter. Iman Shumpert brings an incredible amount of energy off the bench and really worries his opponents into turnovers.

Shumpert has averaged 1.3 steals a game as a Cavalier this season and forces many more with tipped passes and double teams. His sixth man counterpart, Aaron Brooks, is no slump though. The word that probably best describes Brooks this season is ‘consistent’.

Brooks played in all 82 games this season, averaging 11.6 points a night. Incredibly, he only scored less than 8 points in 23 games. He performs night in, night out.

Click ‘Next’ to see the breakdown of the benches in the Cavs-Bulls Playoff series!

The Cavs bench will take a major hit with the addition of Thompson and Shumpert to the starting lineup. This kind of situation is exactly why David Griffin brought in veterans like Shawn Marion, Mike Miller, Kendrick Perkins and James Jones. All four of those mentioned players have won championships before, and know exactly what it takes to do it all again.

Jones saw court time late in the season in Coach Blatt’s rotation as a stretch four, and played well. He’s a specialist shooter that commands attention. His shooting ability it makes it hard to double team others and leave him open. The same goes for Mike Miller.

Cleveland will have to call upon Kendrick Perkins and Brendan Haywood to be productive if the Cavs are to win this series. The Bulls will bring in talls, Nicola Mirotic, Taj Gibson and Nazr Mohammed for Perk and Haywod to deal with.

The Bulls go pretty deep in their guard rotation as well. Behind starters Rose and Butler, we’ll see Aaron Brooks, Kirk Hinrich, Tony Snell and E’Twaun Moore take the floor. That may seem like a lot of names, but Kyrie, Delly, Shump and JR will welcome the challenge.