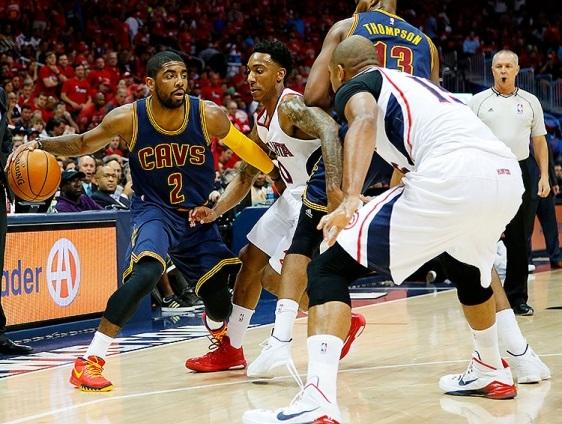 The Hawks came out with the same approach the Bulls did in Game 1 against the Cavs, utilizing their big men to set screens and get an open jumper or a mismatch. Unfortunately for the Cavs, the screens worked in the Hawk’s favor most of the time. With Paul Millsap and Al Horford setting solid screens for Jeff Teague and Kyle Korver, the outcome could be devastating to the Cavs D. Jeff Teague is easily one of the fastest point guards in the league and if he gets mismatched with someone slower, he knows how to exploit them. Similarly, Kyle Korver is one of the best shooters in the league (47.8% fg, 49.2% 3pt, 89.8% ft). A screen on his defender leading to just a fraction of space is all he needs to make you pay with his stroke. The pick-n-roll offense also worked well for the Hawks, given that their bigs have a considerable size advantage over the Cav’s guards. With talented passers such as Teague and Korver its easy to get the ball into the big man for some easy inside points. Here are a few examples of the Hawks’ pick-and-roll offense in Game 1 that the Cavs have to fix to reach the NBA Finals 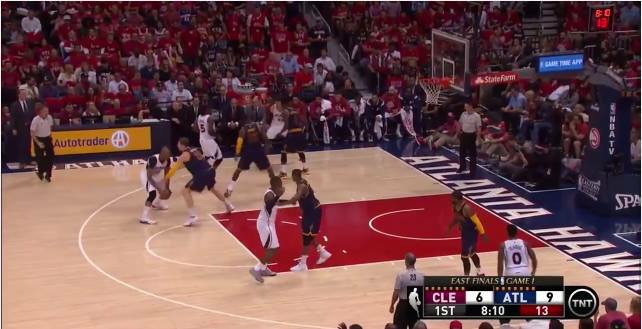 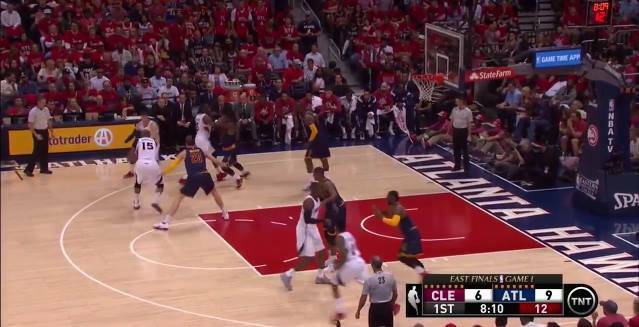 Mozgov stays with Horford too long while Shump is still stuck, letting Korver dribble out for an open shot. 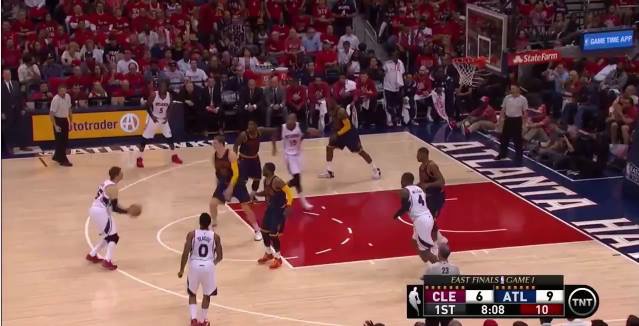 Mozgov steps in late to contest the shot, ending up with a foul and an and-1 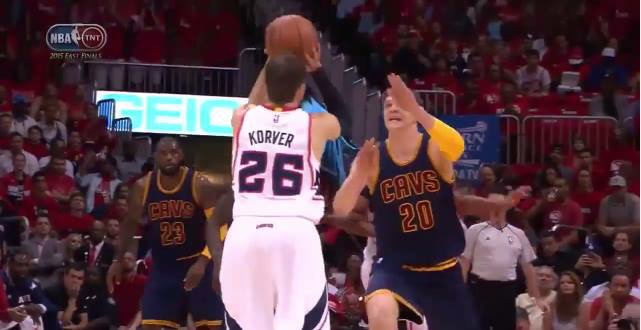 Either Mozgov has to contest Korver’s shot sooner and make him dribble the basketball, or Shumpert needs to beat the screen to stick with Korver. Either way, you cannot let Korver have an open jumper. 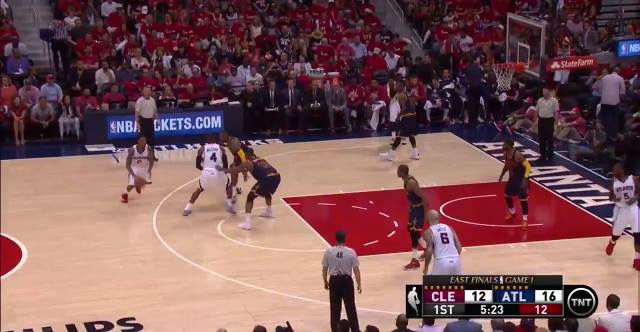 Thompson then switches onto Teague Teague recognizes the mismatch, gears up to drive, and gets Thompson on his heels 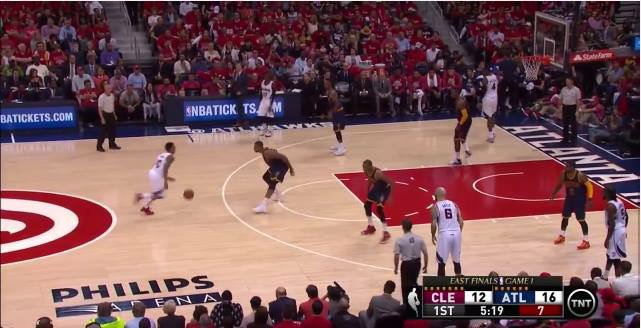 Teague head fakes and is able to beat Thompson to the basket for an easy layup. While LeBron can guard Millsap, he needs to recognize that he can’t leave Thompson to guard Jeff Teague. LeBron needs to beat the screen or Thompson needs to hedge a bit harder to allow LeBron to go under and stick on Teague.

Paul Millsap gives the ball to Dennis Schrӧder and then sets a screen on J.R. Smith Schrӧder recognizes the mismatch and blows by Thompson for a layup 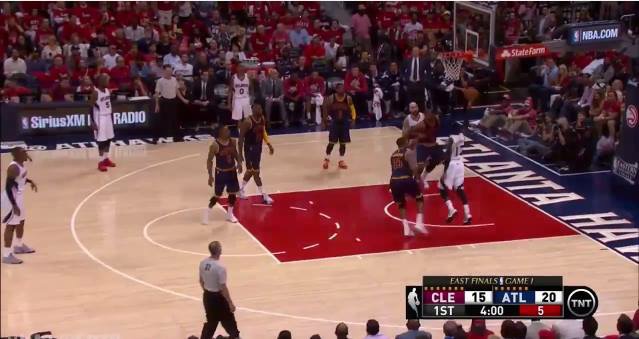 This is a hard screen for J.R. to recover from as it is on his backside. Thompson is just on his heels and too slow to contain Schrӧder. James Jones should have rotated earlier to allow some help side defense.

Here, Al Horford sets a screen on Kyrie so Teague has room to dribble 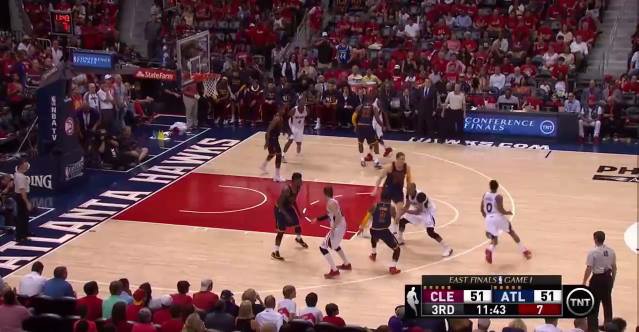 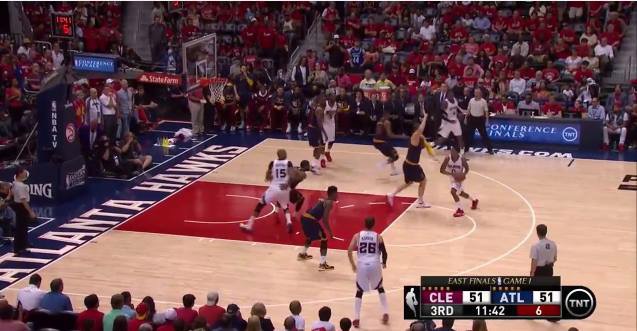 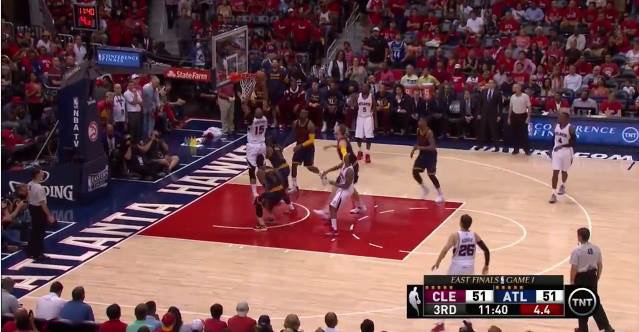 Horford does a great job of sealing Kyrie here. Kyrie was a little slow off the screen and was then in a bad position being posted up on. 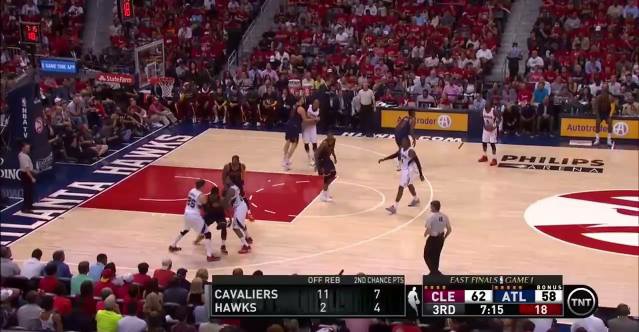 Here’s another hard screen that Shumpert almost broke up. The double screen got him though, and he was just late contesting Korver’s shot. 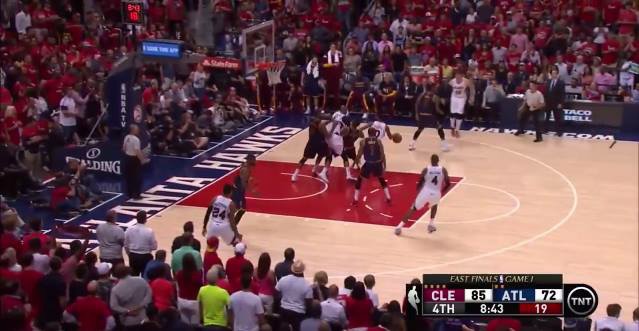 Another hard screen to defend coming from Horford. Teague got the mismatch he wanted against Thompson; Thompson just needs to put his hands up and force Teague to make a play over him while Shump recovers. And Teague is left with a wide open layup 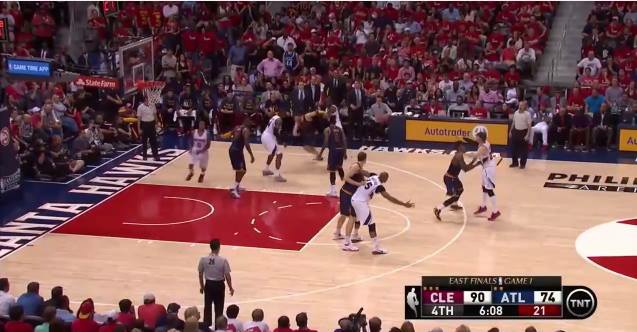 This is just an example of some sloppy D by the Cavs. Delly gets screened hard and is too slow to recover, while LeBron was focused on Paul Milsap. This allowed Teague to slip in a back door cut and a nice pass delivered by Kyle Korver led to an easy basket. 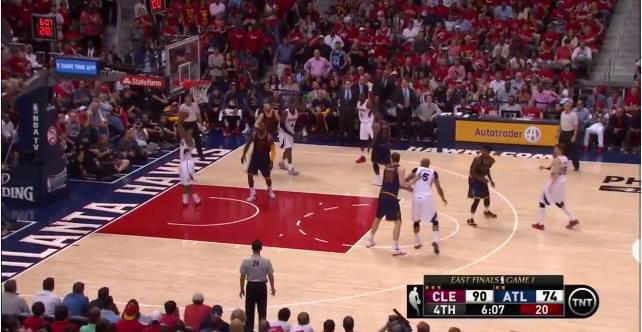 Overall, the Cavs screen defense wasn’t the best, but it surely wasn’t as bad as Game 1 against the Bulls. The big lineup with both Mozgov and Thompson seemed to prevent a lot of shots from the Hawk’s big guys. The Hawks, however, turned to their guards who were able to use their quickness to get to the basket. Luckily, the Cavs were able to play pretty good D and contest a lot of outside shots, leading the Hawks to shoot only 4 of 24 from three point land. However, this meant that the Hawks were able to shoot 30 of 54 (55%) from inside the arc with 46 of their 89 points in the paint. A good chunk of these points stemmed from sloppy Cavs defense. Either Cavs were getting beat to the basket or the Hawks had a pretty good screen offense rolling. Either way, the Cavs need to get some rest and come out with some strong D on Friday night. I’m sure Coach Blatt will find a way to limit the Hawks scoring.