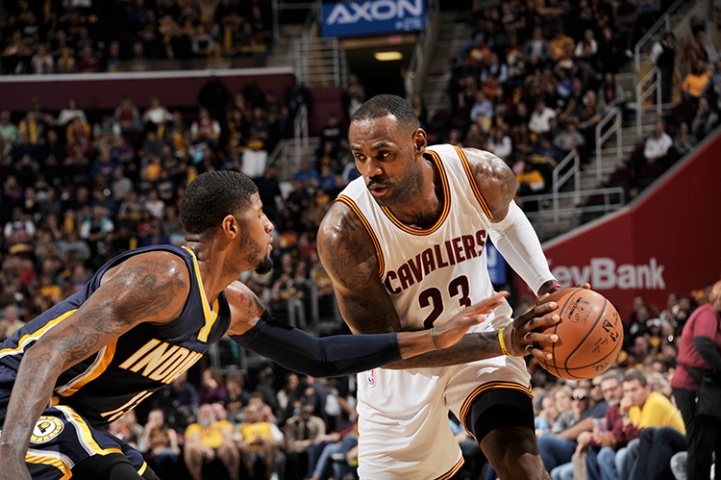 The Cleveland Cavaliers, led by the three-headed monster of a healthy LeBron James, Kevin Love, and Kyrie Irving, are a force to be reckoned with in the East. A lot of teams don’t want to face them, especially after seeing how they dismantled their Eastern Conference playoff opponents last postseason, going 12-2 against the Hawks (60-22 record, 4-0 sweep), Bulls (50-32, 4-2 series win), and the Celtics (40-42, 4-0 sweep). Oh, and Kyrie Irving missed most and Kevin Love missed all of the second and third rounds of the playoffs against Chicago and Atlanta.

Last night, the Cavs took on a Pacers squad who was missing its backup shooting guard in Rodney Stuckey and backup small forward in C.J. Miles. But the Cavs played without all star starting point guard Kyrie Irving, defensive stalwart and starting shooting guard Iman Shumpert, and Shumpert’s backup in J.R. Smith.

The Cavs were thin at the shooting guard position, but going small with Mo Williams, Matthew Dellavedova, and Jared Cunningham with Richard Jefferson playing some two-guard, helped the Cavs overcome any issues at the position against Indiana. The big men led the way for the Cavs in LeBron James, Kevin Love, and Tristan Thompson. After the Cavs beat the Pacers in a thrilling, beginning-to-end game, Pacers guard/forward Paul George spoke to members of the media and said that his Pacers aren’t afraid of the Cavs.

Paul George on the #Cavs: "I think we match up well against this team. This team doesn't really scare us."

For a team that doesn’t have players who can stretch the floor and combine for 44 points, the Cavs played pretty well. Just think about how good they’ll be when they’re healthy. Here is the full quote from George.

“I think we match up well against this team,” he said. “This team doesn’t really scare us. They had to play a full game against us. It’s on us to get where we want to get to. It’s all about who gets the last laugh when we’re in the NBA Finals or playing against the Cavs in the Eastern Conference finals or whoever.”

LeBron and George’s battles date back to his time in Miami, when he and his Pacers also ‘weren’t scared’ of the Heat team that just came off a Finals loss, a team that won 27 games in a row, or a team back-to-back NBA championships. The results spoke for themselves, as LeBron led the Heat past Indiana in a pair of seven game series in 2012 and 2013 and then in a six game series in 2014.

Last year, the Cavs split the season series with the Pacers, with each team winning at home. That, however, had George miss all four games, and LeBron also sat out one of the losses. Now the Cavs are banged up, and Indiana has a whole new mindset for how they’re going to play.

Paul George won’t come out and say it, but if history has taught him and his Pacers anything, it’s that nothing can stop LeBron James. He’s lost three straight playoff series to James, and although both players’ teams are completely different, LeBron’s team is looking like it will be a dominant force in the East for a long time. We know you won’t come out and say it, but you better be scared Paul George.