In the past couple of seasons, the Western Conference always had the most intriguing race to the playoffs. Whether it be who grabs the last home court spot or which team will earn the 8th and final playoff spot, the race in the West always appealed more to fans than that of the East. This upcoming season is the year that could change.

For more than a half-decade, the East had been considered the weaker conference. Over the last 7 years, with the exception of the NBA lockout season, teams in the West needed an average of 48 wins to qualify for the playoffs (not including possible tiebreakers). Teams in the East needed an average of 38 wins to qualify, 10 less victories than the West. Needless to say, the race in the West has been tougher. Following an impressive as well as exciting draft and free agency period, the East is looking to make it known that their conference can be just as tough as the West. A lot of teams made moves from the Bulls acquiring power forward Pau Gasol and shooter Doug McDermott, to the Heat putting together most of their impressive post-LeBron era roster in a span of 2 weeks.

{adinserter 2} Paul George recently stated during Team USA’s training camp that as soon as James returned to Cleveland and former teammate Lance Stephenson left for the Hornets, the Cavaliers were immediately front-runners to win the East while everyone else would have to prove themselves. George’s latest gruesome injury at the Team USA scrimmage is expected to keep him out a minimum of 9-12 months which will make it very difficult for the Indiana Pacers to prove that they can contend and be the better team. That’s not to discount the Pacers, but after losing Lance Stephenson to free agency and now Paul George to injury, Roy Hibbert will have to play like an absolute lock of an all-star for them to make any noise in the East.

The Cavaliers will have one of the best lineups when the 2014-15 season begins. LeBron as well as Kyrie Irving will be the leaders and whether it may be Kevin Love or rookie Andrew Wiggins, either one may very well give Cleveland the “Big 3” that can put them over the top. As far as the rest of the roster goes, everyone will have an important role in the Cavs success. Dion Waiters will have to become an off the ball aggressor and playmaker. Anderson Varejao has always been known for his hustle and effort on both ends of the floor. The low-post presence of Tristan Thompson will help the Cavs develop somewhat of an inside-outside game. The shooters Mike Miller and James Jones should do what they do best, shoot and knock down 3’s.

There is no shortage of talent around the league and despite having the best player in the world, the Cavaliers have teams like Chicago, Miami, Washington, Toronto, and Charlotte to worry about as all have gotten significantly better since the offseason began. LeBron James led teams have always been contenders, because James can take over a game in an instant to guide his team to victory. Kyrie Irving has done the same. Although he went through somewhat of a decline after everyone expected greatness, Irving has the ability to exploit defenses and the quickness to make things happen defensively. 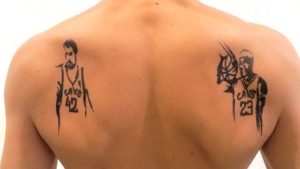