Pau Gasol bumps out Boris Diaw, will he find his way to Cleveland? As a “Remain” voter in last month’s EU Referendum, the name Boris is just mildly off-putting to me, however, Cleveland could easily remedy that with an immediate trade on the 7th of July. Several sources around the league have confirmed that Pau Gasol will take a contract (most likely his last) with the San Antonio Spurs as soon as the mortem period is over. To account for this contract’s size, San Antonio is looking to trade Boris Diaw, backup power forward for the San Antonio Spurs, however no trade has been formalized.

This is a large opportunity for Cleveland. Diaw’s market value is low, not due to his skill, but due to San Antonio’s need for cap space and not players. By sending a pick, or package of picks, Cleveland could sweeten the deal for San Antonio, while using a Trade Exception of their own to pick up the 31-year-old Frenchmen. Diaw is signed on for another two years at $6,500,000 Million and $7,000,000 Million respectively, making him an attractive contract for any team to pick up.

While his market value may be low, Diaw’s playing ability is not. In 74 games last season, Diaw averaged around seven points and two assists while shooting .362 from the three point line. His experience and professionalism alone should be enough to woo suiters, however, an attractive contract and low cost should grab the attention of those around the league.

Why do the Cavs want Diaw?

Beyond the whole “experience and professionalism” Diaw can provide Cleveland with several perks many free agents in their price range simply couldn’t. First, unlike the previously mentioned Deron Williams, Diaw is a career backup, who has no problem coming off the bench, and has experience running an offense that might be older or less talented than his starting counterparts. Diaw is also a product of the San Antonio system, meaning his shot selection and court vision are effective and rarely produce errors. Diaw also is an above average defender, providing an option for when Kyrie is simply getting beat by the opponents. Finally, as Cleveland has lost Matthew Dellavedova to the Bucks, they are without a true backup Point Guard. Mo Williams and Kay Felder both fit the mould, however both have their errors (age vs. untested). Diaw would provide a qualified, professional and intelligent backup Cleveland could rely on.

Why would the Spurs Bite?

First and foremost, it already is clear that The Spurs prioritize Gasol over Diaw, meaning an opportunity to unload the contract is appealing any way you look at it, but Cleveland provides a strategic location as well. With Kevin Durant joining the Warriors and loss of Andrew Bogut, all Western Conference teams are looking at a way to improve their front court to take advantage of the one role Golden State doesn’t have an All-Star in. Pau provides this for the Spurs, but sending the contract to a rival team in the west makes little sense as the goal for all Western Conference teams seems to be the illustrious WCF finals dance with GS. Sending Diaw East ensures that while a contender may land him, Pop’s weapon can only be turned against him if he survives the death machine, which at that point is a near impossible feat of its own and is more challenging than a former pupal. Sure, the ideal location for a contender to send a player would be a dumpster team like the sixers (sorry Philly) but a combination of careful planning and respect for Diaw could easily make Cleveland the most sensible partner for this unloading.

Diaw may just be the Cavs top target this free agency period outside of resigning’s. He provides little downside, has an excellent contract and requires little to pick up. Diaw also far exceeds the talent level of anyone Cleveland could sign on a TP-MLE and fits a niche that the Cavaliers have found themselves needing to fill. 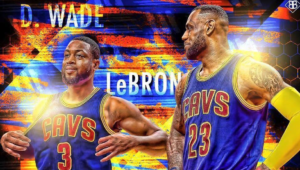