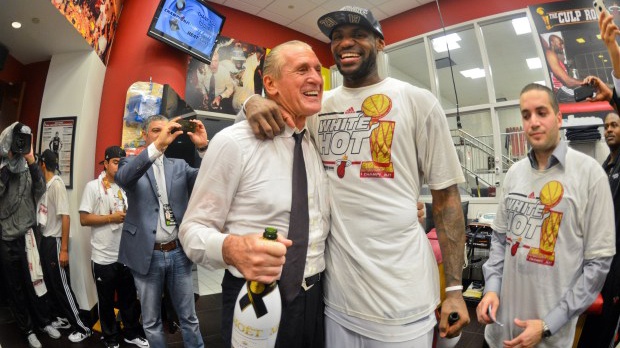 When LeBron James decided to leave the Miami Heat for the Cleveland Cavaliers in the summer of 2014, there was a collective, ongoing cheer of appreciation let out across all of Northeast Ohio. Three years and one championship banner raising ceremony later — we’re still cheering.

Heat president Pat Riley was less than pleased when he learned that his star player was leaving the team. However, it seems Riley has come to grips with James’ decision. Wright Thompson has Riley’s comments in a great article for ESPN:

“He went home because he had to go home,” Riley told ESPN. “It was time. It was really time for him to go home, in his prime. If he’s ever gonna do anything in Akron again, this was the time to do it. Otherwise, he’d have had a scarlet letter on his back the rest of his whole life.”

Riley, now 72 years of age, goes on to tell ESPN that he was extremely upset when he received that fateful phone call from James and his agent, Rich Paul. In fact, Riley took it personal.

“I was silent,” Riley told ESPN. “I didn’t say anything. My mind began to just go. And it was over. I was very angry when LeBron left. It was personal for me. It just was. I had a very good friend who talked me off the ledge and kept me from going out there and saying something like Dan Gilbert. I’m glad I didn’t do it.”

As most Cavs fans will remember, Gilbert laid into James in a public letter when he “took his talents to South Beach” in 2010. A bit of time seems to have healed that wound, but James isn’t of the forgetful sort.

Riley, a multi-time champion on several different levels, will go down as one of the greatest figures in NBA history. Now that he understands why James had to leave Miami, maybe the two legends can reminisce over a few of their victories in friendly conversation.