Monday’s Game 1 matchup of the NBA’s Eastern Conference Semifinals between the defending champion Cleveland Cavaliers and the Toronto Raptors will be loaded with several key positional battles.

One player in particular, Raptors forward P.J. Tucker, has the tall order of guarding LeBron James. So, can Tucker, a newcomer to the Raptors, manage to limit James’ on-court dominance?

“I don’t think his game changes,” Tucker said of James. “I think for the most part, when he’s aggressive and he’s trying to score the ball and he’s going, I don’t think it matters (what I do). I think when he gets a few to the rim, easy, he gets a few dunks, he hits a pullup, he hits a turnaround, and his three starts falling, he’s a feel-good player. If he’s hitting some regular shots, the tough stuff starts to fall. He’s probably the best player in the world. It’s still a feel game (for him).”

The Raptors will be looking to slow James down, sure. However, the Cavaliers are more than just a one-man band — see Kyrie Irving, Kevin Love, Kyle Korver, Deron Williams, and Channing Frye, to name a few.

As most basketball fans know, James is one of the best facilitators in the NBA. During his media availabilty yesterday afternoon, Tucker recognized James’ great court vision.

Game 1 is slated for a 7:00 p.m. EST tipoff inside Quicken Loans Arena. We’ll just have to see if Tucker and the Raptors can indeed find a way to slow down the King and his men. 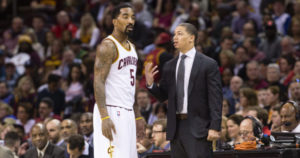