The Orlando Magic, who are currently in the market for a basketball executive, seem to be keeping an eye on Cleveland Cavaliers GM David Griffin.

League sources tell Adrian Wojnarowski of Yahoo! Sports and The Vertical that the Magic could be waiting until the end of the season to see if the Cavaliers will elect to bring Griffin back for another stint as GM.

Griffin’s contract expires at the end of this season, and there hasn’t been much talk of an extension or new offer. League sources tell The Vertical that some insiders around the NBA believe Griffin could be lured away from the Cavaliers.

Griffin, the man who orchestrated the end of a 52-year championship drought in the city of Cleveland and made numerous mid-season trades, has done a fine job piecing the metaphorical puzzle together. Even now, the Cavaliers hold a 3-0 lead over the Indiana Pacers in their first-round playoff matchup. However, Griffin’s star-studded team also holds the highest payroll in the NBA ($126 million). And don’t forget, Cavs head coach Tyronn Lue was given a five-year, $35 million dollar contract. While Griffin’s decisions have been more than sound, it’s just a lot of money for Cavaliers owner Dan Gilbert to think about.

Per Adrian Yahoo Sports and The Vertical:

“Gilbert has hesitated in offering Griffin an extension that’s on par with the NBA’s championship-level executives.”

Apparently, the Magic are willing to wait until the end of this season’s playoffs to engage Griffin in contract talks. There is also some indication that the Magic could promote someone to GM from within their own ranks. Matt Lloyd, assistant GM for the Magic, could be a strong candidate in the race. 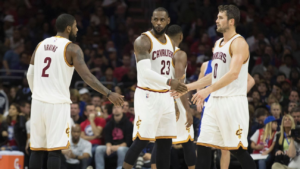