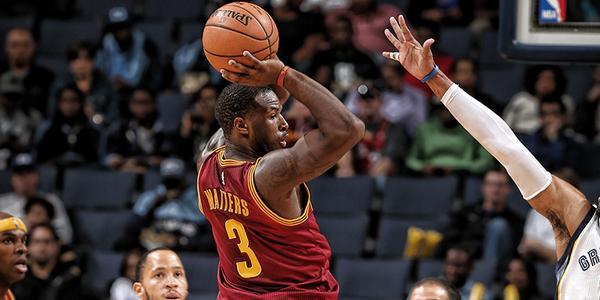 The Wine and Gold (5-2) narrowly lost in Wednesday night’s matchup on the road against the Memphis Grizzlies (3-4). The game marked the end of the NBA preseason for the Cavs and they fully treated it as such, allowing their reserves ample opportunity to soak up key minutes in the second half. Memphis on the other hand elected to give their starters more minutes as they still had one preseason game remaining and felt they could use the action. Though the Cavaliers played tough ball for a full 48 minutes they came up short, ultimately losing the contest 96-92.

In a game without the services of 4x MVP LeBron James (rest) the Wine and Gold used literally the entire roster in the game, a move with the goal of learning exactly what they had to work with going into the regular season. Every Cavs player who suited up and hit the court attempted at least one shot, with the exception of shooting guard Matthew Dellavedova who found other ways to contribute (4 ast & 1 reb). One of the biggest highlights of the game was Dellavedova’s perfect alley-oop pass to power forward Tristan Thompson for a monster, one-handed jam at the tail-end of the third quarter. The Cavaliers led the Grizzlies 44-42 at halftime, but slowly lost the lead in the remaining two quarters. The Cavaliers had five players score at least nine points in the match, though they had a tougher time hitting shots than their Memphis counterparts. Memphis on the other hand had seven players score over nine points, and did a better job with ball movement as evidenced by their 20-15 team assist advantage against the Wine and Gold. In the end however the Cavs had a chance to tie the game in the last seconds but were not able to get a clean look at a game-tying three. While the Cavs lost the game they did end their preseason on a positive note as the bench played both effectively and tough, no doubt giving first year Head Coach David Blatt some lineup ideas to mull going into the regular season.

{adinserter 2} The Cavaliers did many things well in the game Wednesday night. They outrebounded the Grizzlies 44-34 (especially on the offensive board, 15-8) and outscored the Grizzlies in fastbreak points 22-6. These key statistics allowed them to remain in the contest and ultimately have a chance to win in the last quarter. What the Cavs failed to do better than the Grizzlies was protect the ball (lost the turnover battle 18-13), share the ball (had five fewer team assists) and shoot from both the field and the three-point line. The Cavs were also unable to get many easy shots around the rim due to the tight defense displayed by the Grizzlies and frequently settled for long jump shots. After a few quarters the Cavaliers began to find ways around this, yet couldn’t completely solve the issues the defensive pressure caused. The Wine and Gold’s efforts were led by Kyrie Irving (16 pts & 3 ast), Dion Waiters (15 pts & 3 reb), Kevin Love (12pts & 8 reb) & Tristan Thompson (9pts & 5 reb). After many of the starters left the game the reserves were led by the great play of “Smokin” Joe Harris (10 pts & 4 reb) who provided a key spark off the bench.

On the other side of the court the Grizzlies played an all-around great game in earning their third win of this preseason. Memphis did an exceptional job of displaying unselfish basketball in consistently trading long jump shots for high percentage shots in the paint using quick and precise passes. They also perfectly executed pick-and-rolls with such speed that the Cavaliers weren’t able to make defensive switches quick enough to stop them, frequently leading to Grizzlies players with open looks on the basket. The Grizzlies were led by Marc Gasol (16 pts, 9 reb, 2 blks) and Quincy Pondexter (14pts, 5 reb, 3 ast) in their big win Wednesday night.

This preseason has come to a close for the Wine and Gold. Through the seven games we have learned a great deal about both what they Cavs can do and will do this season, the “can” including winning the Larry O’Brien Trophy this coming June.

The Cavaliers will enjoy a much-deserved, week-long rest leading up to the most highly-anticipated season opener in franchise history on October 30th. That day they will host the New York Knicks and fans will enjoy the Cavaliers fan fest, complete with many live performances including those by highly-acclaimed recording artist Kendrick Lamar and comedian Kevin Hart. The Cavs fan fest will start at 4pm that day with the season tipoff scheduled at 8pm. The game will be televised locally on FoxSports Ohio and nationally on ESPN.