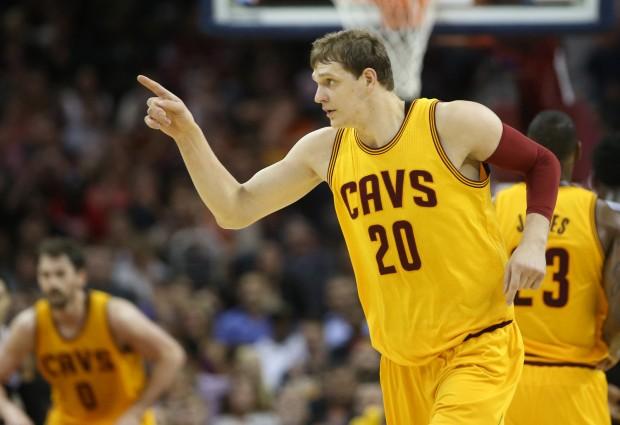 When the Cleveland Cavaliers won last year’s NBA championship, they did it with the help of several players who are no longer members of the team.

Most Cavs fans will remember the important front-court role that Timofey Mozgov played in last year’s campaign, serving as a starting center for much of the season under (then) head coach David Blatt. When Tyronn Lue took the head coaching reigns mid-way through the regular season, he decided to keep bringing Cleveland’s other rim protector, Tristan Thompson, off the bench. Coach Lue intended to keep Thompson’s minutes down so he could be fresh for the playoffs.

The goal of keeping Thompson’s minutes down for a postseason push has remained the same this season, but there have been a few speed bumps along the way. Currently, “Double-T,” as Thompson is affectionately known among his fans, is averaging 30 minutes per game — his highest minutes played per game mark since the 2013-14 NBA season.

The Cavs have dealt with several injuries this season, including two key “bigs” that were intended to be Thompson’s backup. First, the Cavs lost Chris “Birdman” Andersen to a season-ending ACL injury during a December practice session. Then, shortly after this year’s trade deadline, Cavs GM David Griffin made a move for Andrew Bogut, who suffered a season-ending fractured tibia just moments into his debut with the team. Earlier this month, the Cavs brought in Larry Sanders to help sure up their front-court depth deficiency.

Until recently, Thompson was the only true center on the Cavaliers’ roster, as coach Lue pointed out after Saturday night’s 127-115 loss to the Washington Wizards.

“We just have to try to figure out ways to get him off the floor like last night, getting his minutes down,” Lue said Saturday night. “Then getting him off the floor tonight trying to do the same thing. He’s the only center we have. He has to play right now.”

Mozgov’s stint with the Cavaliers earned him a $64 million contract offer from the Los Angeles Lakers during the last offseason, which he accepted. The Cavs, who were (and are) well over the salary cap, could not match that kind of deal. At the time, there wasn’t much made of the Cavs losing Mozgov, who had basically fallen out of the rotation during last year’s playoffs. “Timo,” as Mozgov was known amongst Cavs fans, averaged just 5.8 minutes in 13 postseason games during last year’s title run.

However, in last year’s regular season campaign, Mozgov started in 48 games, played in 76, and averaged 17.4 minutes per contest. In large part, those were minutes that Thompson was able to catch a breather. Now, not having a viable backup at center seems to be a problem for the defending champs.

Thompson, a 6-foot-9 ball of energy, is known as a modern-day “Iron Man” for his consecutive games played streak. His height, however, sometimes causes matchup problems against certain players. A lot has been said of teams across the NBA “going small”. Thompson weighed in on the topic.

“With the way the NBA’s playing right now and the lineups we have, there’s a lot of times you’re going small,” Thompson said. “If we go small, that backup center is going to just sit there anyways, be right there beside me drinking water.”

With just 10 games remaining in the regular season, the Cavs don’t have much time left to sort out their problems. However, a confident Thompson says he still believes in the Cavaliers.