New LeBron James Billboard Across From ‘The Q’ Being Proposed 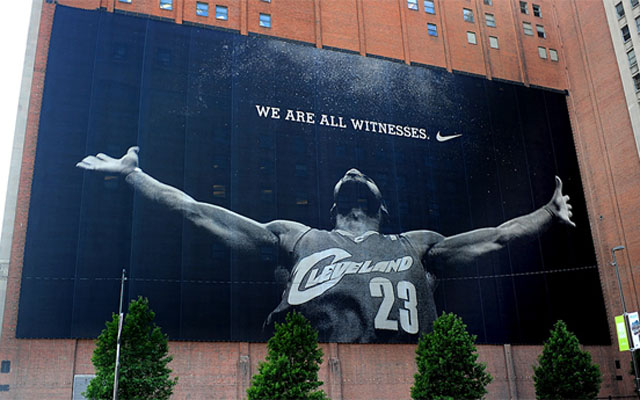 Before LeBron James left for Miami in 2010, there was a gigantic billboard of LeBron throwing his signature powder in the air before a game. After LeBron left for Miami, the billboard was torn down but now that King James is back, it looks like a new billboard of him will be going back up. Cleveland.com has exclusive details on the proposition.

He also could return to the intersection of Prospect Avenue and Ontario Street in downtown Cleveland, where Gigantic Media and the Sherwin-Williams Co. are seeking approval for a banner dedicated to Northeast Ohio’s favorite prodigal son.

Images submitted to the Cleveland City Planning Commission on Tuesday show James with his arms stretched, once again, across the eastern face of the Landmark Office Towers, the Sherwin-Williams headquarters complex at the back of Tower City.

On the new banner, James still stands beneath a puff of chalk dust, acting out a pre-game ritual. But this time, he’s not alone. He’s facing a crowd, instead of downtown. There’s no script. Just a simple Nike swoosh.