JaVale McGee’s time with the Cavs appears to be running out. According to reports, the 7-foot big man could be on his way out of Cleveland at the right price.

According to Michael Scotto of HoopsHype the Cavs are asking for a second-rounder in exchange for McGee:

Cleveland is also hopeful to move veteran center JaVale McGee in a trade that would net a second-round pick in return, league sources told HoopsHype.

This sounds like a fair price for McGee, who arrived in Cleveland in the offseason following a trade with the Los Angeles Lakers. That deal also included L.A.’s second-round pick (2026), with the Cavs sending Jordan Bell and Alfonzo McKinnie in the opposite direction.

McGee has played a significant role for the Cavs this season, providing some useful minutes for the squad’s second unit. He is currently averaging 8.0 points, 5.2 rebounds, and 1.2 blocks in 15.2 minutes off the bench.

The Cavs could be showcasing McGee right now as they look to move on from the 33-year-old. For his part, McGee appears to be doing his bit to attract attention and this Magic Johnson-like nutmeg assist from Monday night serves as a testament to this notion.

Cleveland currently stands at 16-27 and is not a threat in the Eastern Conference (although, they are just five games outside the playoffs picture in the East). The rebuilding phase continues, and the team appears to be willing to stockpile assets in exchange for vets like McGee. The Cavs could be sellers (again) as we approach the trade deadline. 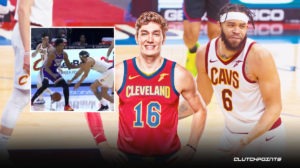