The Cleveland Cavaliers are on a lengthy quest this season for a ring and to bring an end to the championship drought that has fallen upon the city of Cleveland.

The NBA on TNT released a new theatrical trailer for the Cavs season with the theme “Quest.” There, LeBron James, Kyrie Irving, and Kevin Love are all dressed like ‘Mad Max’ characters or like something out of the third ‘Uncharted’ video game. Here’s the behind-the-scenes look, also courtesy of NBA on TNT. 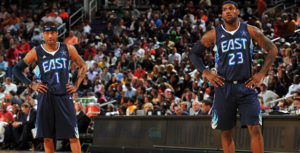 JUST IN: An Ohio Authority Reacts To The Idea Of Allen Iverson In Cleveland
Related TopicsCleveland CavaliersKevin LoveKyrie IrvingLeBron James