Cavs zeroing in on De’Andre Hunter The Cleveland Cavaliers are reportedly zeroing in on Virginia Cavaliers forward De’Andre Hunter, according to Joe Vardon of The Athletic.

“The Cavs want Hunter,” said Vardon. “That’s who they want.”

The Cavs are slated to draft with the fifth overall selection, and most mock drafts have Hunter vacillating from the fourth to seventh spot.

The New Orleans Pelicans are reportedly looking to move their fourth overall pick for another first-round selection and a rotational player on a good contract, but trading one spot up to get Hunter at that cost is just not feasible for a team like the Cavs, hoping to acquire good talent to rebuild.

At this point, the hope is that New Orleans, or whoever selects right before Cleveland opts to draft a guard like Darius Garland (Vanderbilt), Coby White (North Carolina) or Jarret Culver (Texas Tech), to allow for a chance at Hunter.

If the Pelicans keep the pick, it’s more likely they will opt to draft Garland with the fourth pick than get a small forward like Hunter.

The first three selections are likely locked as the holy trinity of this NBA Draft — with Zion Williamson, Ja Morant and RJ Barrett likely to get drafted as listed.

Hunter is a capable two-way wing, who shot decently from beyond the arc in his sophomore season while earning NABC Defensive Player of the Year honors. At 6-foot-7 and 225 pounds, he makes for a prototypical NBA small forward with good all-around skills to make for a solid pick. 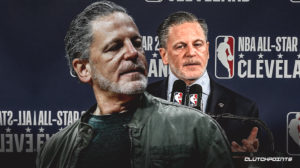