NBA 2K17 is very close to it’s mid-September release date, and that means players as well as fans can get ready for the video game.

Although these aren’t confirmed, some of the overall ratings have been released, and although they look accurate, there are some odd ratings. Here are the Cavs’ ratings, where LeBron James was rated a 96 which is so far the highest in the game. Kyrie Irving was rated an 89.

Photo shows NBA 2K17 ratings for LeBron, Kyrie, Cavs.
These are NOT officially confirmed though. Some weird grades. pic.twitter.com/IQhh53CBDz

Here are the grades for the Warriors top four players, all of whom are rated 90 or higher, including both Klay Thompson and Draymond Green.

Green is rated a 90 while Irving is rated an 89. Yeah, kind of confusing. Although there’s no denying that Green is a talented player, a case can be made that he is a product of the solid system implemented by Steve Kerr and the Warriors. It also helps to have two great all-time shooters to make you look good.

These aren’t the officially confirmed ratings, however, so there’s still a chance that these are changed. 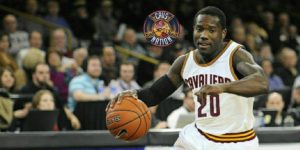