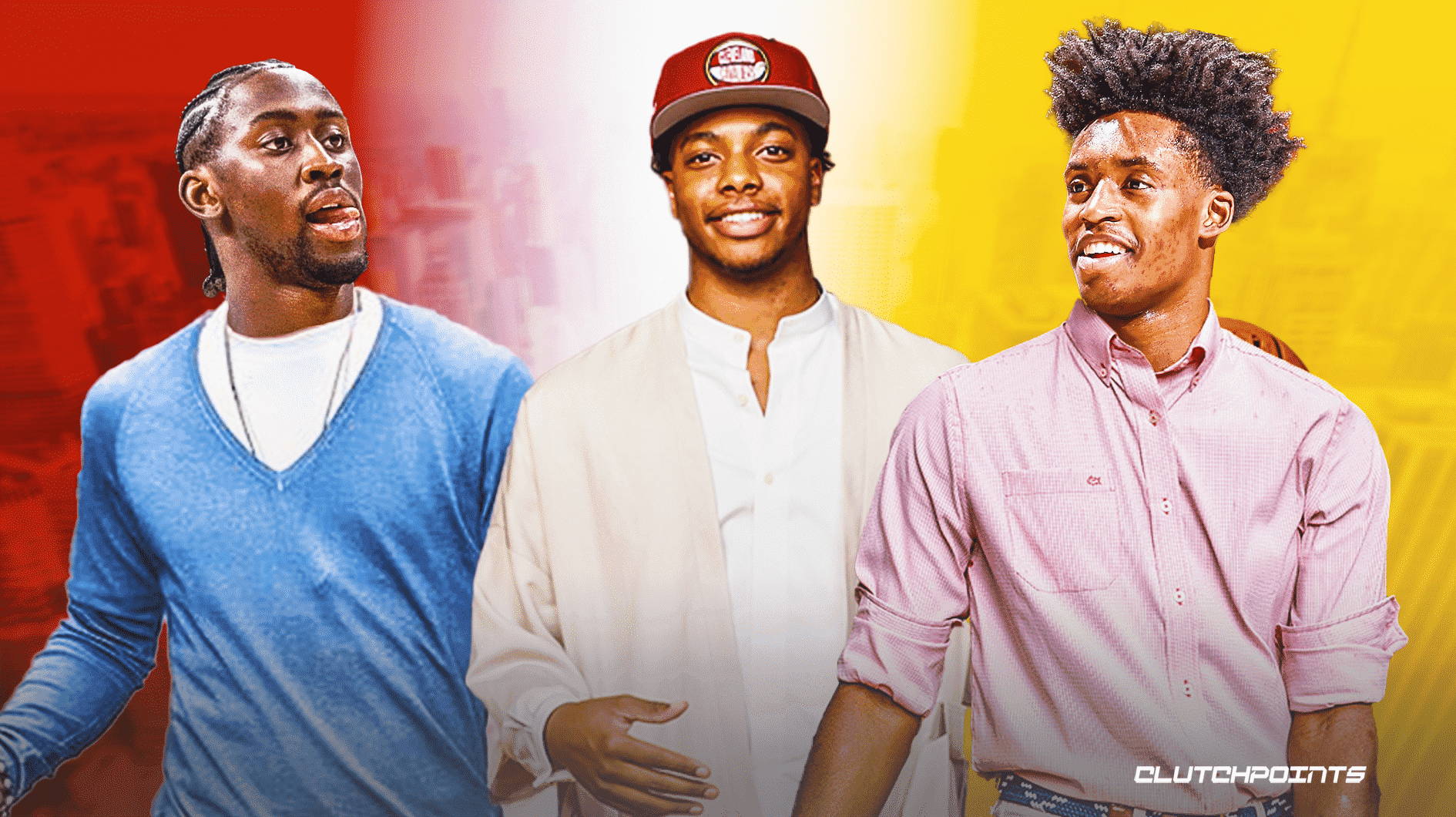 Most Cavs fans who watched the team last season remember one particularly rough stretch of the schedule, where Cleveland was completely wiped clean of guards. At the time, Collin Sexton, Darius Garland, Kevin Porter Jr, and Matthew Dellavedova were all out for a variety of reasons, which resulted in Damyean Dotson and Cedi Osman splitting the minutes at PG. JB Bickerstaff also winded up leaning heavily into tall-ball, not so much by choice, though.

Just over a year ago.

Yes, that is Damyean Dotson, Larry Nance Jr, Thon Maker, Andre Drummond, and JaVale McGee all on the court at the same time. pic.twitter.com/5gG5ZxlcHE

Well, the Cavs are entering an eerily similar scenario at this point of the season. They’re still doing tall-ball, but they actually have the frontcourt skillsets able to accommodate that. The Cavaliers have once again ran into the issue of having no guards. For a team trying to win, that’s extremely problematic. Not to mention the fact that they already struggle to get things going in the halfcourt.

They have a couple emergency options in Rajon Rondo (who also just sprained his toe) and Brandon Goodwin, but that’s exactly what they are: emergency options. They aren’t built to be the primary orchestrators of a competent offense. At least not anymore, in Rondo’s case. Garland has been the unequivocally most important player for the Cavs all season, so missing him is an absolute buzzkill. Caris LeVert was brought in to help alleviate some of the offensive burden off of his shoulders, but now they’re both out.

Neither injuries are expected to be serious, but both could very easily miss a couple weeks. Storming out of the gates has Cleveland sitting in a good position standings-wise, at the moment. However, a 5-6 game losing streak could send them tumbling down the conference order significantly and set them firmly within the tussle of the play-in/lottery bubble.

Darius Garland’s back injury has been bothering him for several weeks now, and it’s becoming mildly worrisome that it could be a cloud hanging over him for the rest of the season. Despite participating in All-Star Weekend, it’s clearly still present. As for LeVert, an infamously injury-prone player, the damage was a simple unfortunate ankle tweak.

Collin Sexton went down with a knee injury 11 games into the season and is *expected* to be done for the season. Ricky Rubio later suffered the same exact thing as his teammate did. Goodwin and Rondo were picked up in the wake of Rubio’s exit, before he was shipped out for Caris LeVert.

So for roughly the next two weeks, the healthy guards on the Cavs’ roster consists of ten-day signee Tim Frazier and two players under two-way contracts with the team: Brandon Goodwin and RJ Nembhard (44 career NBA minutes). What steps can the Cavaliers take at an attempt to tread water in the absence of their ball-handlers?

Brandon Goodwin is going to be leaned on

Ever since arriving in Cleveland on a ten-day deal, Goodwin has impressed in the wine & gold. His play should have arguably had him above Rondo on the depth chart, but his playtime has been inconsistent at best. However, he’s always been up to the task when his name was called.

Although he’s the smallest player on the roster, Goodwin plays with a lot of heart and reckless abandon. He slashes into the paint with relative ease, using his burst and functional handle to a high degree. His jumper hasn’t always been a dependable weapon for him throughout his career, but he’s got a feathery release from deep. Defensively, he gets up in his opposition’s business like his life depends on it. Despite the size disadvantage, he can be a bit of a pest.

These are the things that’ll keep you around in the NBA. Brandon Goodwin plays hard. Smallest guy on the court.

Soars up battling for the offensive rebound.

Boxes out the much larger Keita Bates-Diop, grabs the defensive board, and nabs Okoro with the hit-ahead feed. pic.twitter.com/YSuAvjGncX

Goodwin is the only player on this team who is even remotely suited to be a primary ball-handler, so he will be heavily relied on in the next few games, due to a lack of other options. He may just be up to the task, though. He still has that youthful energy and can do stuff that Rondo just isn’t able to do anymore.

Brandon Goodwin has been a godsend for the Cavs. Getting some rim-pressure and a guy who can capably run the offense when DG’s not out there is huge. Giving Rondo a real run for his money for the backup PG title pic.twitter.com/ZiwxfX2NgK

The Cavs should experiment with their open roster spot

Following the Rondo trade and emergence of Goodwin, Kevin Pangos was clearly ostracized on this roster. He had his own shot at seizing an opportunity earlier in the season when Cleveland’s backcourt suffered another stroke of backcourt injuries, but was largely ineffective. Over All-Star break both sides decided to mutually split ways.

Koby Altman brought in longtime NBA journey man, Tim Frazier, into the open roster spot ASAP once it was announced that Rajon would be missing minutes as well as Garland and LeVert. The nice thing about 10-day deals is that it offers the opportunity to try out players and see how they fit with the team, while sacrificing little flexibility and zero commitment. There is potential for things to stick though, as it did with Brandon Goodwin.

Frazier is a veteran who knows what he’s doing, but it’s been a while since he’s been able to make an impact on the floor. While the Cavs are still ransacked with injuries, they can use this time to experiment with different players as well, after Frazier’s ten-day expires. With the team being as short-handed at the guard position as they currently are, they could get immediate playing time. Perhaps that could mean bringing in familiar faces, such as Brandon Knight, Isaiah Thomas, or Dante Exum.

There is no perfect solution to the PG dilemma in Cleveland. With the overwhelming swarm of injuries and the trade deadline already passed, the options available at hand are just very limited. There are a couple internal options at different positions who can moonlight as lead guards. Cedi Osman and Evan Mobley are going to be the primary options for increased time with the ball in their hands, but the results are naturally going to be very sporadic.

Lamar Stevens is another guy who should see an increased workload in these circumstances. He’s been buried on the bench ever since Caris LeVert was acquired, but Lamar’s shown legitimate flashes this season with very encouraging offensive abilities. In college, Stevens was “the guy” for Penn State. A tough shot maker in the mid-range and strong driver to the rim.

Against smaller defenders, Lamar gets right into their chest and shrugs them off fairly easily, generating space for him to get a clean look at the rim. pic.twitter.com/0Rt8bo6mng

In the NBA, the former-Nittany Lion has received minutes due to his defensive grit. As he’s become more comfortable in the NBA though, he’s starting to show once again what he did night in and night out in college. His combination of strength, handle, and touch from the mid-range make for a very unique player who has legitimate upside with the ball in his hands.

JB Bickerstaff has often rode with a short bench this season for the Cavs. Nine-man rotations have been his go-to, but he’s gone as shallow as eight. However, now with many of the high minute-getters on the team missing time, he should look to let his players get more rest, so that they can bring the energy when they get on the floor a little more.

The Cavaliers are a team that is legitimately deep with NBA rotation-caliber guys. Now is as good as time as ever to let guys like Lamar Stevens, Dylan Windler, and RJ Nembhard get their shot at legitimate minutes. Getting a longer look at young players in game action is never a bad thing as well. At least a 10-man, but even maybe an 11-man rotation could prove to be useful for the team.

Dylan Windler (when healthy) is not only a knockdown shooter, but is very capable attacking closeouts and an extremely adept cutter/relocater. The perfect low-usage wing. pic.twitter.com/EAvWBm4Q7Z

There’s no easy solution here. The best the Cavs organization can do is pray that their ball-handlers return as soon as possible. Until the, minor tweaks will have to yield big results for Cleveland to continue performing at the rate they have been all season.