For a while there, Mo Williams actually had fun. He actually competed for a team that had championship aspirations and he thought he could retire happily in that city. That city was Cleveland and that team was the Cavaliers.

Mo Williams has arguably only been on one really competitive playoff caliber team in his career. Aside from the two-and-a-half year stint with the Cavs, he played with the Jazz, Bucks, Clippers, Blazers, Timberwolves, and Hornets. None of those teams had significant chances at a championship, however, and despite the the salary he was earning, Williams wasn’t very happy anywhere but Cleveland.

“That’s key for me: Obviously going into the summer, there’s a lot of situations where you can go to other teams, make a few more millions, they won’t make the playoffs, and maybe guys will get it like ‘Hey, I’ll be done in April’ so that’d be cool too. At my age, guys maybe think about things like that.

Williams has only been a part two winning teams in Portland and Cleveland. Everywhere else resulted in an early offseason and more vacation time. Williams, however, isn’t into getting as much rest as possible. He wants to compete.

“But for me, that’s not fun. You know, I had a good year, but I didn’t have fun. When you feel like you don’t have a chance to compete for a championship, that love, or rather motivation to go out and compete at a high level every night: you’ve got to find it somewhere else.”

“Unfortunately for myself, I did last year. I found it because I felt like every other team in the league wrote me off and thought I was on a downward spiral and I used that as fuel when I train in the summer. I went out to try and have a hell of a year and just finish strong.”

He did end up having a hell of a year. After a few down years since being traded from the Cavs, Williams averaged 14.2 points, 2.6 rebounds, and 6.2 assists in 29.1 minutes per game. Aside from that, he had at least 18 games with at least 20 points, including career-highs with 19 made field goals, 33 field goal attempts, and 52 points against the Pacers.

Now rejuvenated, Williams looks to help the Cavs get back to the NBA Finals and deliver a championship to a city that is more than just any other city to him. 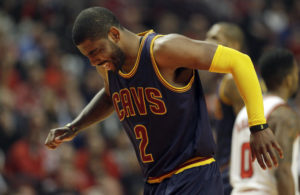