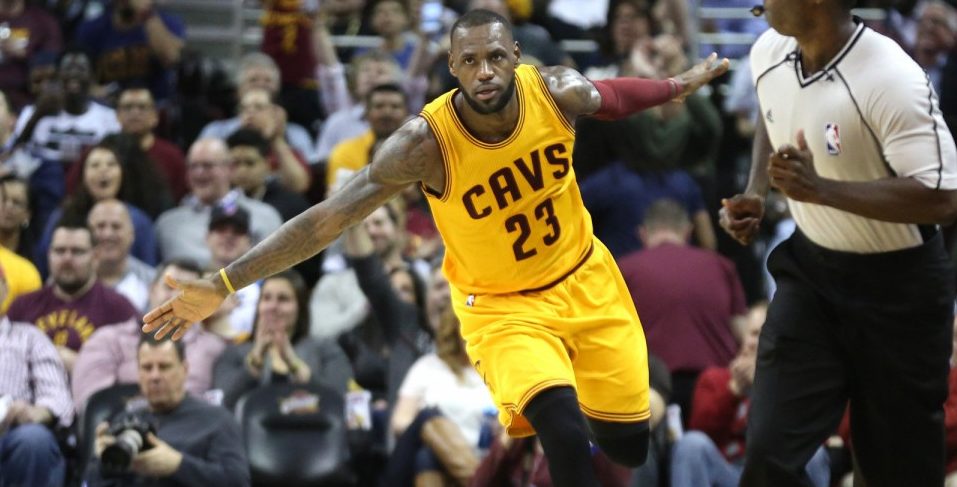 On Sunday night, the NBA’s defending champion Cleveland Cavaliers were in Phoenix for a match-up with the Suns inside The Talking Stick Resort Arena, which resulted in a 120-116 victory for the Wine and Gold.

It’s fairly common to see celebrities and athletes of other sports in various basketball arenas across the NBA; Sunday was no different. Seated courtside with his wife, Nicole Johnson, was 28-time U.S. Olympic gold medalist, Michael Phelps.

After jumping out to an early 20 point lead in the first half, the Cavaliers seemed to take their foot off of the accelerator in the second. As the minutes on the game clock waned, the Cavs, led by their Big 3 of LeBron James, Kyrie Irving, and Kevin Love, managed to stave off a late Suns rally.

With 11:18 remaining in the game and the Suns continuing to trim Cleveland’s big lead, James reminded patrons in attendance why he carries the title of “The King” with a rim-rocking dunk. After the slam, James pointed right at Phelps and gave a respectful “that was for you” nod as he trotted to the other end of the floor.

Joe Vardon of www.cleveland.com recants Phelps’ praise for James in his recent article.

“The great ones always know how to get it done, no matter what sport it is,” Phelps told cleveland.com. “You take LeBron for example, no matter what, even in the fourth he just gets it done, you know?”

“He hit the 3 and he looked over again, it was funny,” Phelps said. “He definitely played well. It’s always fun watching what they do, I’ve watched Steph (Curry) here too.”

James spoke to Allie Clifton of Fox Sports Ohio with regards to Phelps being in attendance for Sunday’s game.

“One of the all-time greatest athletes. For him to come and watch us is unbelievable,” James said of Phelps in a post-win visitors locker room.

James and Phelps have been fellow U.S. Olympians since 2004. The two athletes were last together in New York for Sports Illustrated’s annual award gala, where James was named 2016 Sportsperson of the Year and Phelps received greatest Olympian of all-time honors.

James, along with his teammates, Kevin Love and Kyrie Irving (also U.S. Olympic team members), took a few moments to chat with Phelps outside of the locker room after Sunday night’s game. Phelps spoke with reporters afterwards.

“You built that relationship as Olympians so, it’s always funs to catch up with the boys and watch what they do,” Phelps said. “Those guys are always at swim meets, so it’s enjoyable for me to come watch the boys.” 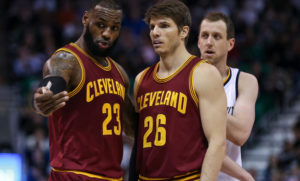