Matthew Dellavedova Has Enemies In The Warriors’ Locker Room Matthew Dellavedova is one player whom people love to hate. He may not look the part, but he is as rugged as they come. To him, 30/70 balls are already considered as 50/50, hence the unwavering tenacity.

The way he goes about with his game is best suited for the playoffs, where it’s all about survival. That’s why it came as no surprise when, in his first postseason appearance, the Australian point guard made people notice. Kyrie Irving’s injury helped in getting some spotlight over to Dellavedova’s side, but he made the most out of every minute he was on the floor.

His star shone the brightest in the recent NBA finals where he played beyond his ceiling, and physical limitation, frustrating Stephen Curry in a number of stretches while being a heads up distributor. He made an imprint not only on the reigning league MVP, but also on his teammates. He was such a pest to Golden State that Warriors starting center and fellow Boomer Andrew Bogut revealed the hate in Bill Simmon’s podcast, and it was also reported by Yahoo Sports.

That might be easier said than done. He’s got some enemies in our locker room.

He plays hard and people think he is dirty, but he’s actually a great fella and we get along really well. But he plays physical on the floor.

To further solidify the reputation, Matthew Dellavedova was even voted by players and coaches as the dirtiest player in the league. This season, he has been a pleasant surprise with his highly improved three-point shot and decision making. The best part of it all is that he is still the in-your-face, smash mouth, aggressive player that Cleveland fans came to love.

He is now one of the most underrated backup point guards in the league, and the Cavs are lucky he’s on their side. 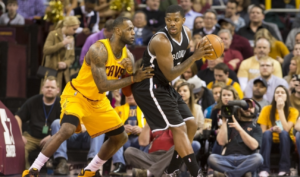