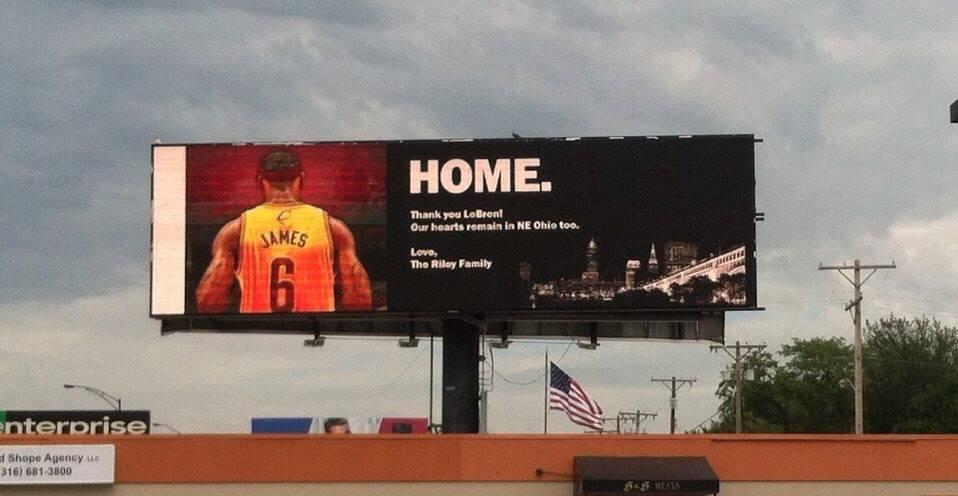 “We live in Derby, KS (Just outside Wichita) The USAF brought us here about 18 years ago…. but Ohio will always be home. I was born and raised in NE Ohio and have lived and died every year with Cleveland teams– something I’ve passed on to my 6 kids. {adinserter 2} LeBron coming home meant so much to our entire family, we wanted to find a big way to express the pure love and excitement we feel– even though we are so far from HOME- this has allowed us to share in the amazing story unfolding.

I’m 43 and have been a Cleveland fan my whole life. I’ve lived (and died) through The Drive, The Fumble, The Move, The Decision – in one letter it was all wiped away.

We were so touched and moved by what LeBron wrote. We are so proud of him and so proud of our home. We just wanted to say “thank you” to LeBron for what he did and what he wrote. It just meant so much to us, and we wanted to tell him – even from 1000 miles away.

Now that’s what we call a dedicated fan! It seems like LeBron is welcomed not only in Cleveland but everywhere. Oh and there’s one thing Jeremy Riley also mentioned:

“It’s me and my wife’s anniversary today. She wasn’t real happy that I put a board dedicated to LeBron instead of her!”