Justifiably so, the league is abuzz with hyped fans, sour doubters and even more hyped fans reminding doubters (sometimes excessively) that it’s the playoffs. Then again, many fans have long forgotten the 30-11 team atop the East led by the capable, but misunderstood, David Blatt. After bringing a 17-time European champion for a chance to win one in the NBA, the Cavs’ front office made it clear that they’re prepared to do whatever it takes. Unfortunately for the accomplished Blatt, his American visa resided in a state that hasn’t seen such success in over 50 years. Since his surprise exodus in January, the Cavs took three months to show convincing progress, but they have validated a lot more than home court advantage from where they stand today.

Last week, Blatt interviewed with the New York Knicks about their current coaching “situation.” In a city where stars are made and young, capable pieces have been added,a coach with direction won’t be asked to reroute. The opportunity has kicked off what will likely be a summer of meetings for Blatt, and the Cavs couldn’t be happier. Especially his mentee, current Cavs coach Tyronn Lue.

Regardless of politics, the Lue didn’t undersell his recommendation. Jason Lloyd of the Akron Beacon Journal reported on Lue’s thoughts regarding his good friend David Blatt.

“He definitely deserves another chance,” Lue said. “I thought Coach Blatt did a great and phenomenal job here. He taught me a lot. Just being friends with him and getting a chance to understand him was great for me. I know a lot of guys around here, we talked about it the other day, they miss him and his presence. I would just like keep in contact with him. Hopefully, he gets another job in this league because he deserves it.”

After an awakening first round, opposition to the Cavs gambles have ceased. Firing a coach at the top of a conference sounds like a grammatical error. But with changes like Kevin Love at Center and their best rim protector on the bench (Mozgov now Mozgone), Cleveland is finally finding answers for each answer they sought in each decision. For Blatt, Tyronn Lue and his Cavaliers, nobody is looking back; and recently, it’s been working out for both parties. The Cavs are looking at 12 more wins, while Blatt has his eyes set on a new beginning. 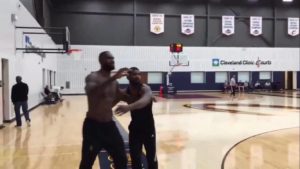