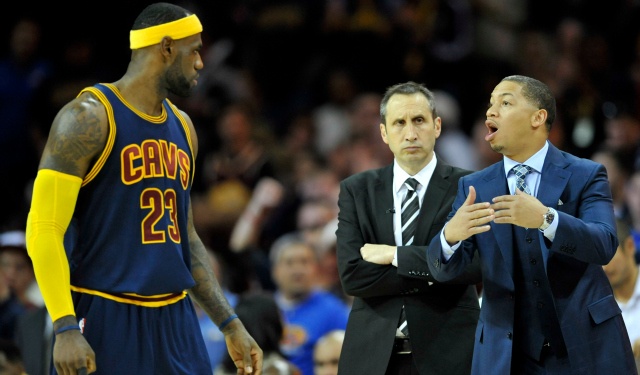 There were high expectations for Tyronn Lue when he took over as head coach in late January. The Cavs were still sufficiently above .500, in sole position of first place in the East, and looked as if they were shaping up to be a top team in the league. That being said a chance was needed, these Cavs weren’t built to be one of the best teams in the league, but THE best team in the league, and beating the Warriors was going to take a focused group, something Blatt simply wasn’t accomplishing. Lue hasn’t had the time to truly refocus the group, as he was charged with taking over during arguably one of the toughest stretches of the season (almost all games he’s coached have been either back to backs, or part of a three in four), leaving little time for practice to learn the new system; a process Lue stated was “tough” followed by several expletives. Still, sitting at 9-3 over his first 12 games, and two losses which could be directly attributed to poor free-throw shooting, Lue is seemingly doing the impossible, tearing a great team down, and rebuilding a better one in under half of a season.

Even with only a few practices under their belt, Lue’s new system is becoming apparent. Lue treats all of his players like role players, even the All Stars. Kyrie, Kevin and LeBron have more focused roles, similar to those that Matthew Dellavedova or Iman Shumpert play. Kyrie is reserved to a primary scoring role, seeing his assist numbers drop in favor of higher scoring numbers. Since Lue has taken over Kyrie is averaging two more points a game than he was under Blatt, and since the game against Detroit on the 30th Kyrie has been scoring an average of 26 points a game, eight more than his year to date totals. Kevin Love’s numbers have stayed relatively the same, however as of late his rebounds are far more offensive in nature, and is playing with noticeably more hustle. Similarly he is shooting far more shots in the paint and taking on average three less three point shots a game. Even LeBron, while keeping his statistics the same as his averages, is seeing more basket drives as well as and-1 oppotunities than isolation, mid-range jump shots. 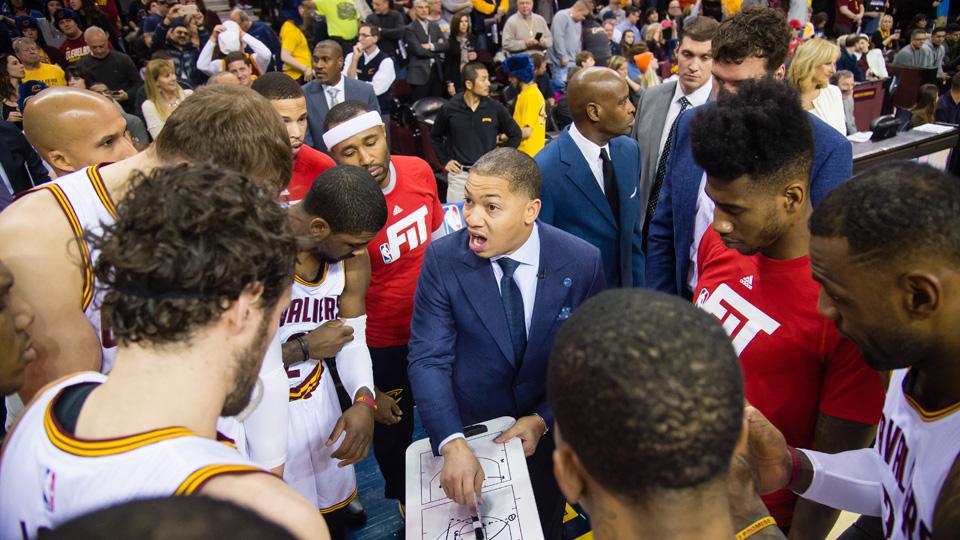 Though Irving may be the one seeing increased numbers, it’s really Love who has seen a drastic improvement in efficacy with the coaching change. Love is playing a more aggressive game, partially due to how the Cavs push the ball up the floor and look to find cleaner shots (Love has seen his catch and shoot percentages skyrocket since Lue took over), and the partially due to where his usage is coming from. Love is up an average of two touches in the paint a game. Love is also becoming a more active defender. While he is no Draymond Green or Dwight Howard, he is playing with more hustle on both ends of the court, and is being rewarded for it. The new system focusing on Love, however, is not without its hiccups as seen during the back to back losses earlier in February, and clearly there are still kinks to work out.

After the 99-84 win over New Orleans, Lue was asked about some of the issues plaguing the Cavs. Lue once again called out the players individual efforts, claiming that “I don’t think we’re in great shape.” He also stated there are issues with the play calling in general, mentioning that plays are sometimes lost in translation as players are trying to learn a new system. Some leeway can be given, as over the tenure of Lue’s first 10 games, the team has had 2 official practices, meaning most sets need to be run before a game, or in the game itself. Making matters worse Lue was chosen to coach the All-Star game meaning that while the team will get some rest, those 6 days won’t be used refining this new system, something that clearly will be a setback. Adding to these issues is LeBron’s shooting slump. While his point averages are still holding, he went almost a week without hitting a three point shot, and can be almost solely blamed for the loss against the Celtics due to his poor free-throw shooting. Despite all these setbacks, however, Cleveland has found a way to keep winning, something they can attest to two players.

When you talk about models of consistency in the NBA, the players that first jump to mind include Tim Duncan, Kevin Durant or DeMar DeRozan. The words JR Smith and consistent are usually only ever connected by the word not, but since Lue took over, he has found himself providing some much needed offense that sometimes the Cavs struggle to find. In the game against New Orleans, the Cavs attempted 40 three point shots, JR taking 15 of them and making six. While not fantastic, J.R.’s three point percentage has been hovering around 50% a game, making just under five threes a game while he’s at it. Over his past four games, he has had three 20 point games, and one 14 point, both of which are significantly above average. His +/- (how much better or worse the team plays with x player on the court) has only been negative once since Lue took over, and in general has sat around +10. Even while Lue’s team is refocusing itself, Smith has found a way to bring consistency to the court.

There is another player quietly making a humungous impact on the Cavs. The Cavs as a whole have a negative +/- when he isn’t on the court, and is having a career year, shooting at a 43/43/90 clip, and is in consideration for Most Improved Player. Matthew Dellavedova has become a critical part of the Cavs game plan, bringing hustle and exceptional defense to the one guard position, and has vastly improved his offensive game, currently holding the 6th highest three point percentage in the league. Impressive performances such as the 15/5/3 game against the spurs help to highlight this, especially since he was allegedly battling a sore left hamstring for the past several weeks. It’s Delly’s toughness that has made him such a critical part of the team. Since game two and three of the Finals last year, Delly has proven he’s a critical asset to the team’s success. His hustle and grit, often confused for dirty play, has earned him a role on the team, and most likely a big pay check next year (that is, if Gilbert is willing to pay).

Is everything perfect under Lue? No clearly not. Is Lue showing potential with this new system? Very much so. Some might say progress is moving slowly, and that this team still has not changed dramatically, but with only two practices to learn an entirely new system the devils in the details. Lue is rebuilding from the ground up, I thought he was an optimist to think that a 10 man rotation could work, but after watching Anderson Varajao play like it was 2008 against NOLA I may have just been proven wrong. Only time will tell if firing Blatt was the right move, but from what I’ve seen so far, call me convinced. 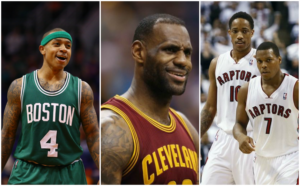