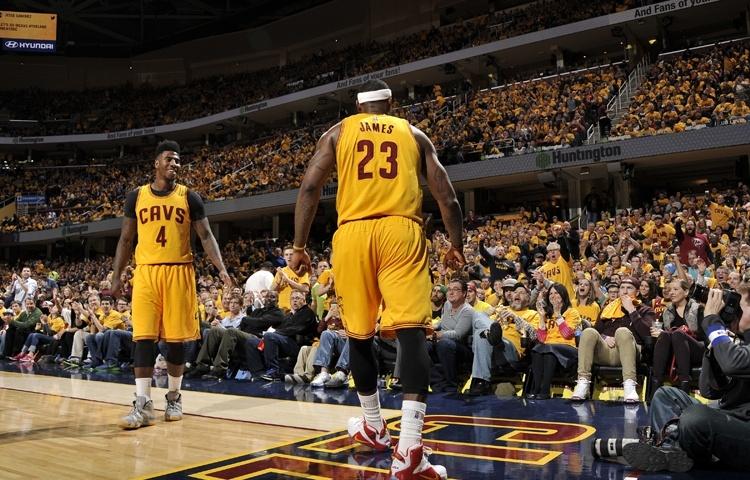 The Cleveland Cavaliers continued their hot streak into the month of February where the team is pulled off eight wins in 11 games. In ten February games thus far, the Wine & Gold offense has been one of the most prolific in the league averaging 105.3 points per game, but more importantly, their defense also clicked allowing opponents to score 95.3 points per game. Usual suspects LeBron James and Kyrie Irving led the scoring barrage with averages of 24.4 and 20.8 points respectively.

After wins over potential playoff foes Washington Wizards and Miami Heat as well as West powerhouse Los Angeles Clippers and the league leading Golden State Warriors, we look back at the top 10 moments of February, starting with number 10:

The Cavaliers matched up with the Clippers on February 5 and the team coined as “Lob City” were in for a rude awakening. Cleveland fans were spoiled with electrifying dunks as LeBron James and Timofey Mozgov led the Cavs` aerial assault. It was a special night at The Q as the sky was filled with Wine and Gold with the Cavs dominating a powerhouse Clipper team by giving them a dose of their own medicine.

Click “Next” to see the ninth best moment in February! The Cleveland Cavaliers welcomed the Los Angeles Lakers to The Q on February 8 and the Cavs` big three put on one of their best collective performances so far this season. Kevin Love, after being sent an alleged cryptic message on Twitter by LeBron James, had his best game as a Cavalier scoring 32 points and grabbing 10 boards. James was his usual all-around brilliant self with a near triple double of 22 points, 10 rebounds, and six assists. While Kyrie Irving was extremely efficient with 28 points on 10-14 shooting with 10 dimes and only one turnover.

This probably sent chills around the league as they showed everyone their full potential together.

Click “Next” to see the eighth best moment in February! In the same February 8 game against the Los Angeles Lakers, newly acquired Iman Shumpert made sure that everyone will remember him that night. Kyrie Irving took the ball out on the sideline and delivered an excellent pass to a cutting Iman Shumpert for a perfect alley-oop dunk over a hapless Carlos Boozer. The Q was rocking.

Click “Next” to see the seventh best moment in February! In a battle of the Eastern Conference’s top point guards, Kyrie Irving went at it against John Wall in a 127-89 Cavalier depowering of the Wizards on February 20. Irving outscored Wall and one of best highlights of their duel was a sweet and-one play by Uncle Drew.

Everyone knew they were in for something when Irving ran towards the rim on a transition play as Wall waited for a date at the basket. Both players got up and Irving sneakily went for the tough up and under while catching a foul from Wall.

Click “Next” to see the sixth best moment in February!

The Cleveland Cavaliers showed up at The Palace against the Detroit Pistons looking sluggish but they still managed to eek out a win thanks to Kevin Love`s career high eight three pointers. Love was simply stroking it from deep and it was a beauty to watch him space the floor. A night like this from Kevin Love makes Cavaliers fans drool on the potential of this lineup. It also displayed the Cavs’ ability to put on that extra gear in ugly games such as this one.

Click “Next” to see the fifth best moment in February!

5. From New York to Cleveland

The Cavaliers visited the Knicks in a game that also doubled as JR Smith and Iman Shumpert`s Madison Square Garden homecoming. The two former Knickerbockers made everyone jump out of their seats as they connected on an explosive play.

Shumpert had the ball outside the three point line and all he needed was a split-second eye contact with JR Smith for the latter to make a hard cut at the baseline for a sick reverse-double pump alley-oop dunk. LeBron didn’t want to get up after starting his postgame treatment early, but it was so crazy even James could not hold back his excitement.

Click “Next” to see the fourth best moment in February!

In the Cavaliers` game against the Pistons, LeBron James surpassed Scottie Pippen to become the best passing forward of all time, topping the list with 6,142 career dimes. James accomplished the feat by feeding Kevin Love for his fourth three-point basket midway through the second quarter.

He leads Pippen by a mere seven assists but LeBron is only 30 years old and that should give him a royal lead in the rankings over the rest of the pack.

Click “Next” to see the third best moment in February!

3. The King Eclipses The Answer

At the Mecca of basketball, greatness took a step forward as LeBron James passed Allen Iverson to claim the 22nd spot in the NBA’s All-time scoring list. His first quarter bucket underneath the rim put the target on Ray Allen’s at the 21st spot. At only 30 years old, LeBron has already eclipsed great scorers such as Allen Iverson, Charles Barkley, Clyde Drexler, and Larry Bird in the scoring list. No one knows where he’ll end up after all’s said and done but I bet everyone agrees that he’ll be up there sitting very high.

Click “Next” to see the second best moment in February! In a battle of the NBA’s hottest teams, the Golden State Warriors and Cleveland Cavaliers played within an intense atmosphere at The Q and their two MVP candidates, Steph Curry and LeBron James, were faced with the task of leading their team out of the jungle in downtown Cleveland. LeBron James scored 42 points, grabbed 11 rebounds, assisted five times, and stole the ball three times while also blocking a shot in an all-around performance which outshined Stephen Curry’s 18-3-6 statline. This game should significantly affect Cleveland’s rise in the Power Rankings and also LeBron’s MVP run.

Click “Next” to see the top moment in February!

The Golden State Warriors paraded their league best record and potent starting five at The Q against the hottest team in the league in the Cleveland Cavaliers who also boasts of an equal if not better first five. The Cavs have been on an absolute tear since the assembly of the their current starting five and it continued against the Dubs outscoring them 96-54.

LeBron James and Kyrie Irving also came prepared as both outplayed Warrior Chief Stephen Curry. James was simply in MVP-mode and Irving displayed brilliance on both ends by outscoring Curry while making him bleed for his buckets. All in all, this was an absolute statement game for Cleveland and this should further solidify their place in championship talks.