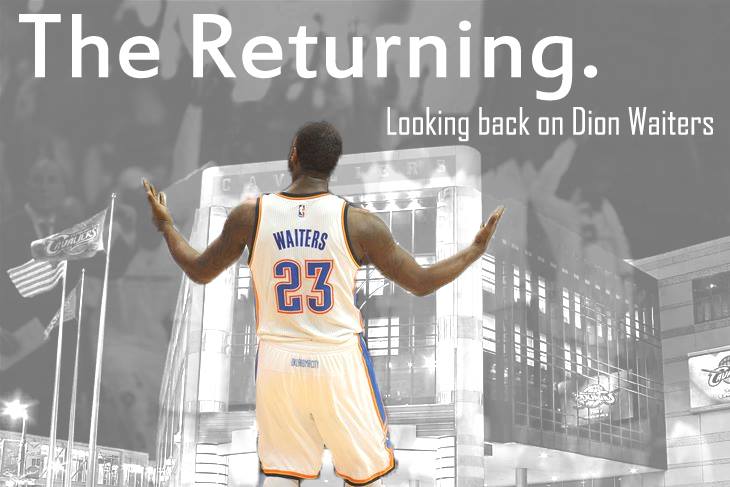 As the Cleveland Cavaliers welcome the Oklahoma City Thunder to town today, Dion Waiters is set to return to the Q to take on his former team. We at CavsNation decided to compile a countdown of Dion’s best moments as a Cavalier, from his best performances to his growing companionship with backcourt mate, Kyrie Irving. He had his ups and downs, and although the Cavs have been doing just fine without him, we wish him the best in Oklahoma City.

Dion Waiters comes out with a strong performance in his Cavalier debut, scoring 17 points.

9) Dion’s Coming Out Party vs. Clippers

This was the moment in his rookie year that Dion started making noise around the league. He scored 28 points, while setting an NBA rookie record as well as a career high seven three pointers in a great road win against the high-flying Clippers.

In Brooklyn on one of the biggest stages with not only Jay Z and Beyonce watching, but also Commissioner Adam Silver as well as the Duke and Duchess of Cambridge, who were in the midst of their first trip to the United States. Waiters came out and scored 26 points in an impressive blowout victory over the Nets.

Dion Waiters scores 30 points in a quality performance against one of the NBA’s top teams. Who knew he’d end up playing for them later on?

Nothing like Dion Waiters hurting himself on a thunderous dunk in traffic, followed by a momentary embrace with Kyrie to assure us that he and Irving don’t quite hate each other.

As Cavs fans, we can never have enough reassurance. After Kyrie Irving suffered through a broken jaw in practice early in the 2013-14 season, some reports surfaced that it was from Dion Waiters, who reportedly punched Irving in the face. They then took to this interview to clear the air and (again) assure us that maybe they don’t have malicious intentions towards one another.

3) This highflying dunk on Birdman

Waiters come flying in for arguably his best dunk.

2014’s Epic Shooting Showdown of Unprecedented Enormity. Ok, well maybe not, but this was still a big highlight of last year’s All Star Weekend.

Dion Waiters puts up his first career game winner in the Motor City to give the Cavaliers a road win. Loul Deng’s reaction was the real highlight here.