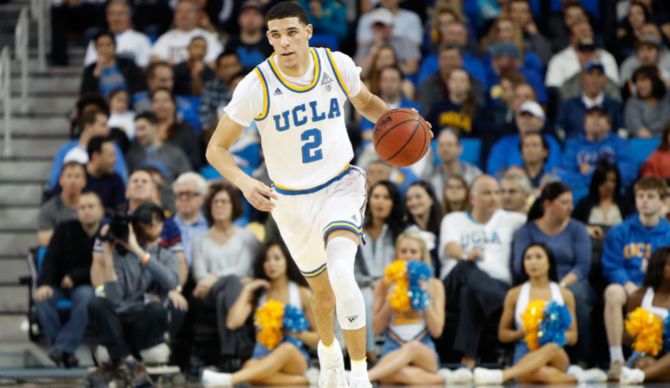 The Los Angeles Lakers and their fans, barring a major upset in the draft lottery next month, are gearing up for the 2017 NBA Draft. Over the last couple of months, reports have said that they’re very intrigued by freshman combo-guard Lonzo Ball out of UCLA. He made a name for himself during the season and impressed during the NCAA Tournament despite falling to the Kentucky Wildcats in the Sweet 16.

Ball, whose father has been on a media rampage going from network to network making outlandish claims about himself and his oldest son, is projected to be a top three pick in this summer’s NBA Draft and many Lakers fans are eagerly awaiting to see if their team will be able to select the hometown kid. Lonzo grew up in Chino Hills, California, which is about a 45 minute drive from Los Angeles.

While many would assume the obvious choice for Ball’s favorite player growing up being recently-retired Lakers legend Kobe Bryant. If you were among one of those, consider yourself mistaken. Ball recently joined ESPN’s SportsNation in downtown Los Angeles across from the Staples Center, where the Lakers and L.A. Clippers play, and told the hosts that his favorite player growing up is actually LeBron James.

Ball was asked about the video of James apparently making fun of his jumpshot.

“I have no problem with it. That’s my favorite player growing up. I mean he’s shooting like me.”

The Los Angeles crowd then shouted “oohs and boos” Ball was then asked: “You’re telling me Kobe wasn’t your guy growing up? It was LeBron?”

“I mean,” said Ball, sort of hesitating before adding, “I’m not going to lie. LeBron is my favorite player. He is. I respect Kobe too, but LeBron is my guy.”

JUST IN: Tristan Thompson unhappy about not travelling with team due to injury
Related TopicsCavaliersKobe BryantLakersLeBron JamesLonzo Ball