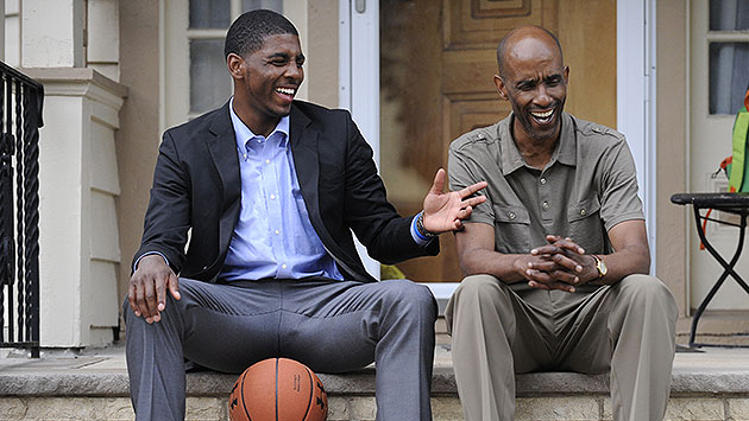 Kyrie’s father Drederick Irving also referred to as ‘Big Irving’ was seen playing in a fantasy game wearing number 11. The game was held at the USA basketball camp where Kyrie and other NBA stars practice and train for the upcoming FIBA world cup. Coach K, head coach of the national team, held a fantasy game in which anybody could play in. Kyrie’s father Drederick was offered to play, so he did. Along with Drederick, bystanders and high school ballers played in the fantasy game. After Drederick watching his son play many times, it was now his chance to show his son that he could still ball. Kyrie as noticed in the tweet commented “Definitely see where i get my mannerisms from lol.” The two seem to have a close bond as a father and son should have, except this relationship is special.

{adinserter 2} Kyrie once said in an interview that he wouldn’t be the man he is today without his father, he spoke about how his father pushed him day after day, making him better physically and mentally. Drederick knew his son was destined for greatness. In high school, Drederick believed his son would be the best in the state of New Jersey, and at the end of his high school senior year, Drederick wanted him to be best player in the country. Kyrie continued the interview by speaking about how his father ‘set goals’ and they ‘had to be accomplished.’ In college, Drederick told his son he was going to be the number one pick in the draft, he believed it and he wanted his son to as well. Kyrie explains how his father was a ‘good man’ but told Kyrie to be a ‘better man.’

Drederick played basketball and tried out for a place on the Boston Celtics back in the day but didn’t get it. Instead, he played in New York’s Pro Am League. Standing at 6’4, he played point guard like his son Kyrie. Drederick knows his son can be the best and truly believes in his potential. Along with millions of others, Drederick believes his son will make history in the NBA.

Check out this short clip of Kyrie and Drederick balling in their garden.