LeBron James hit the shot of the season, so far, yesterday for his Cleveland Cavaliers, forcing overtime in one of the greatest games you are likely to ever see.

The four-time MVP sent the game into an extra period, with a ridiculous one dribble, fadeaway, turnaround three-pointer off the glass whilst falling out of bounds to silence the home crowd and send a shock through the Verizon Center.

Despite his critics James continues to deliver clutch moments like these as his career progresses, and even before the circus shot, James was on fire in winning time. He’d sunk 3 three-pointers before that creating an electric atmosphere in the building, and the crowd could sense something big was coming from the King.

It was the type of play that gets better every time you see it, as the catch itself from the incredible outlet pass from Kevin Love was truly difficult also. To have the presence of mind to get to the three point line within the three seconds, then have the strength to turnaround and get the shot off is other worldly, but making it is near impossible.

Watch is again here from all angles, and watch as the crowd and the Wizards players are sent into shock by what they just witnessed.

It was a classic case of James imposing his will on the contest, and refusing to lose. It’s not over until he says it is. 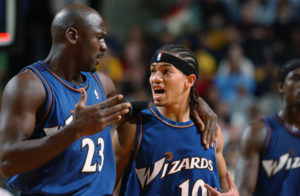