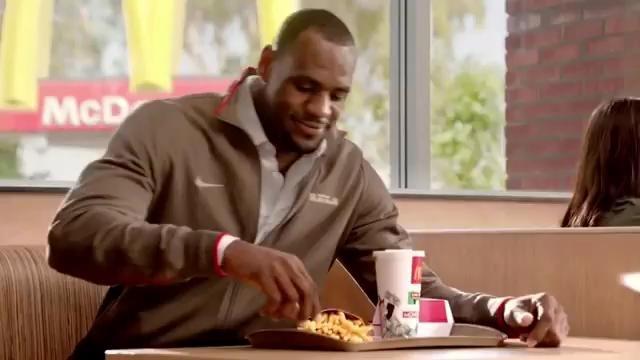 LeBron James is a very busy man with likely a lot of things on his mind. He has basketball and his family, including his newborn daughter, on a daily basis. Because of that, one can’t really blame James for occasionally forgetting who exactly sponsors him among all of his suitors.

During his time with the media following the morning shootaround, James seemed to forget about one of his biggest sponsors McDonald’s when addressing the bad habits or changes he’s made from early in his career.

When asked about when he started lifting weights, James answered honestly with:

“Uhmm, 24. I ate McDonald’s my first couple of years in the NBA,” partially implying that McDonald’s is unhealthy for you. “I didn’t stretch. It didn’t matter. I was 18 and could do whatever I wanted to.”

It was an honest mistake, but a bad move by LeBron as he’ll surely hear about this in the next couple of days from reporters and some of his managers. When the reporters further questioned him on when the last time he had McDonald’s was, James clearly realized his mistake and cleared it up as best he could with:

“Every day. Every day, every day… I had it this morning. Egg-and-Sausage McMuffin. All day.”

Here’s James most recent commercial with the food chain from late last year:

LeBron will likely be more careful with his responses from now on in regards to anything that bad-mouths or depreciates any of his sponsors.

Just as a reminder, check out some of LeBron’s top 5 sponsors starting on the next page:

McDonald’s has been sponsoring James since he was drafted. It’s not clear how much James makes from them, but it definitely adds up with the rest of his endoresements!

Continue on the next page below!

At the age of 18, before he even played a game in the NBA, LeBron signed a seven year, $90 million contract with Nike. He has been with them ever since and makes more than $10 annually from Nike alone.

LeBron bought a KIA K900 and loved everything about it. So much so that he had his camp reach out to KIA so he could have his name among the company and the K900. signed an agreement to endorse the luxury sedan last season. It’s a great opportunity for both parties as KIA is already the a sponsor of the NBA. With the size and luxurious features of the car, it really is fit for a king.

Click “Next” to see who else James is with!

James has been the spokesman for the Sprite as well as the Powerade brands of Coca-Cola since his rookie year, when he signed with the company before playing his first NBA game. That contract was for six years and around $12-15 million. When Coca-Cola heard that LeBron drank Vitamin Water in high school, they bought it from company Glaceau for $4.1 billion and he became Vitamin Water’s spokesperson.

LeBron has endorsed Samsung since his epic SamsungNote II commercial a few years back. His multi-year deal is worth approximately $100 million!