In order to play for Team USA in the 2016 Olympic Games, President of Team USA Basketball Jerry Colangelo announced that NBA players had to be present at the 2015 Mini-Training Camp in Las Vegas. As it turned out, 34 players showed up, including LeBron James, Chris Paul, and Carmelo Anthony.

If you didn’t know, James, Paul, and Anthony are all really close friends and have been their entire NBA careers. James hasn’t committed to playing for Team USA yet, leaving the option open for him to play in his fourth Olympics or just let the young guys take care of business. Carmelo Anthony, however, hinted that James, along with himself and Chris Paul, will be playing in their fourth consecutive Olympic Games next summer.

“We talk about it all the time,” Anthony said of winning another gold medal with James and Paul. “Just about how we want to go out and end it the next year with the Olympics, just how much we want to take from this experience. I’m going on four [Olympics], LeBron is going on four. Paul going for three. We’re connected by the hip.”

“I’ve been part of USA since 18 years old,” Anthony said. “There’s history to be made. You got to start holding on to those moments and enjoy them.”

There were 34 players who made the team during this past minicamp, but only 12 will be making the roster next summer. LeBron James is one player who is definitely in if he decides to play, along with Stephen Curry, Anthony Davis, James Harden, and the 2014 FIBA MVP Kyrie Irving. We would expect Chris Paul and Carmelo Anthony to play next summer alongside LeBron James, supposing everyone is healthy at the time.

LeBron James isn’t getting any younger, is nearing the end of his prime, and has played in five straight NBA Finals which means less rest than usual. Chris Paul just played the first healthy season of his entire career and will have some big playoff goals for the Clippers these next couple of years. Carmelo Anthony is coming off of a torn patellar tendon that cut his 2014-15 season short. All three players are entering some very important years in their lives, but it looks as if a chance to win the 2016 Olympic Gold Medal will be a part of it. 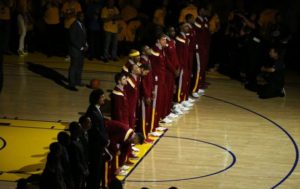