LeBron Responds To Rumors About Reuniting With Dwyane Wade 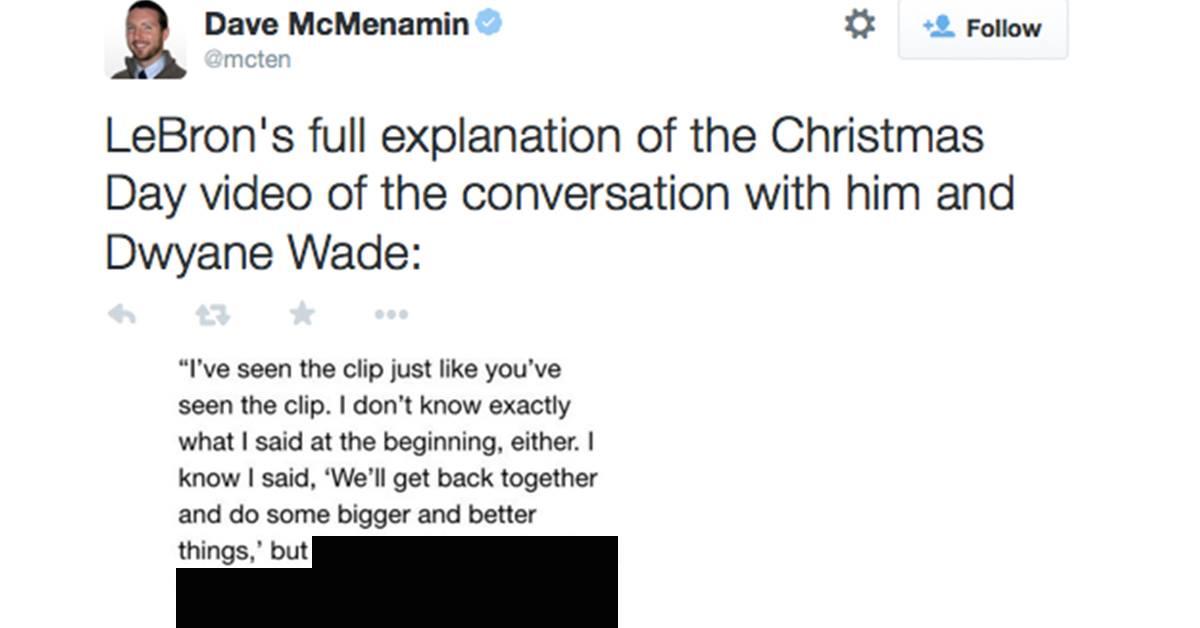 Instead of closing out an ecstatic 2014 with a flurry of baskets, the Cavaliers have faced an avalanche of unprecedented and speculating rumors. Many media sites that have prided themselves in spreading the false rumor, claim to have heard LeBron James and Dwyane Wade conversing about new reuniting plans after the Cavs fell to the Heat on Christmas day. Without a single source, but after “listening very carefully,” they heard exactly what they wanted to hear to start a media frenzy. Apparently, in the background of this video, with no context, the site believes LeBron said this:

Well, Cavs Nation brings you an actual source who has LeBron’s personal response to the epoch-making speculation:

LeBron's full explanation of the Christmas Day video of the conversation with him and Dwyane Wade: pic.twitter.com/HWYbSc0aj2

Logically, it wouldn’t make sense to even dignify this rumor – but there is one farfetched possibility that hasn’t escaped the realm of sanity. Ignoring the massive PR hit either James or Wade would take leaving Cleveland or Miami, respectively, the two might not never play together again. Both players have player options in the 2015-2016 season, therefore both can technically opt out of his contract and become a free agent starting next year. The only scenario that would most likely play out is some move by Cavs’ GM David Griffin to clear cap space and possibly bring Wade to Cleveland. However, we don’t have sources, so we won’t speculate any further.

In the words of author Neil Gaiman…

A good writer should be able to write comedic work that made you laugh, and scary stuff that made you scared, and fantasy or science fiction that imbued you with a sense of wonder, and mainstream journalism that gave you clear and concise information in a way that you wanted it.