On Saturday night, the Cleveland Cavaliers hosted the Charlotte Hornets inside Quicken Loans Arena, resulting in an impressive 116-105 victory for the home team.

In the closing phases of Saturday night’s game, Cavaliers superstar LeBron James was whistled for a foul on Hornets big man Frank Kaminsky as he made a cut to the basket.

James was less than pleased with the call. After Kaminski clanged the first of his two subsequent free-throw attempts, James, feeling justified, called on his inner Rasheed Wallace, saying: “Ball dont lie!!”

LeBron James didn’t like getting called for a foul on Frank Kaminsky…so of course he said “Ball Don’t Lie” after the missed FT pic.twitter.com/j6P55NQjy2

The ball knows and sees all. We all know that. What a classic moment from The King. 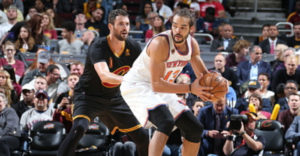