LeBron James should wear an eye patch when he practices shooting. Seriously. 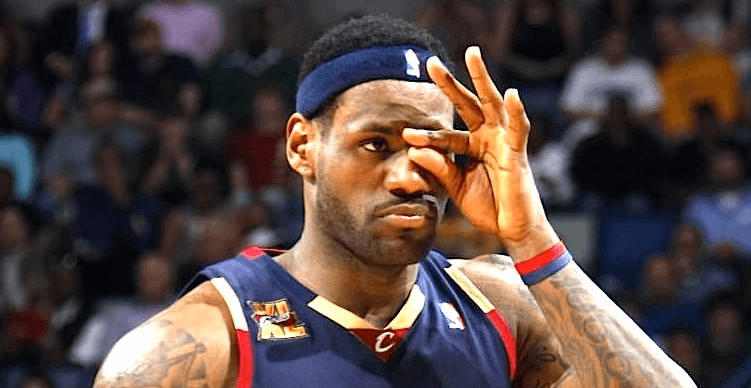 Full disclosure, there is no scientific research to support any of this.  That being said, it’s airtight and completely true.

Early in LeBron’s career, I noticed that he and I share a unique trait.  We both have mixed handedness.  On the basketball court, LeBron is very versatile, but his dominant shooting hand has always been his right.  However, if you look at other activities, you’ll notice that he writes left handed, plays pool left handed, and eats left handed.

I have always been the same way.  Over the years, it caused a lot of confusion with coaches and teachers.  Tee-ball was an absolute nightmare.  It has always been a regular occurrence to begin writing and hear, “You’re left handed?” to which the response is always some variation of the same story.  The best way I have been able to describe it has been that with things that require minimal movement and precision, I’m left handed.  With everything else, I’m right handed.  Here we can see LeBron trying to golf and annihilating small children with water balloons.  Both of these tasks are done right handed, further confirming this similarity.  Anyway, throughout my experience of living on this earth as a mutant, I have found comfort that others are similar to me.  Mainly, LeBron James and Will Ferrell.

Now onto the important part of this post.  The first real issue that came about because of my mixed handedness was noticed while learning to shoot a gun.  My dad taught me the proper grip to shoot a gun right handed but I always attempted to move my entire head across the gun to look down the sights with my left eye.  I looked like this girl.  After adjusting my grip to left handed, the problem was solved.  This has not been the case with other activities throughout my life, including shooting a basketball and cornhole.  I’m unbelievably bad at cornhole.  My hypothesis is that the left eye dominance is conflicting with my right handedness and telling my brain to throw to a slightly different spot than where the board actually is.

Now let’s look at LeBron.  He’s amazing in almost every aspect of basketball but it’s no secret that he has had his ups and downs when it comes to shooting at different times in his career.  Could it be that LeBron shares the same issue with left eye dominance that I mentioned earlier?  I think so.  Anyway, back to me being terrible at cornhole.  A couple weeks ago, I was at a friend’s house and the cornhole boards were brought out.  I get this feeling of emptiness in my stomach knowing I’m going to embarrass myself and risk the lives of everyone in the vicinity of the opposite cornhole board.  In the midst of a spectacularly awful game, I hatch the idea to close my left eye while I threw.  Suddenly, I began to throw a little more accurately and could focus more on what I needed to change.

So, what’s the most logical way to translate my cornhole solution to LeBron?  Ask him to close his left eye whenever he shoots a three?  No way.

Realistically, no one can guarantee that an eye patch will instantly improve his shooting percentages to levels they have never been, but I think we’re all ready to see the possibilities.

On a serious note, there has been research done on the idea of eye dominance in sports.  It’s also worth noting that other athletes, like Russell Westbrook share this trait.  LeBron has even discussed his handedness in the past.

Obviously, the counterpoint is a loss of vision in one eye would have a very negative effect on depth perception.  This would likely be a major detriment to anyone’s ability to play the game of basketball but could be the price we have to pay to see eye patches flood the NBA. Then again, we’re just talking about practice.