LeBron James is coming off yet another fantastic season where he took the Miami Heat to their 4th straight NBA Finals appearance. Now he’s headed back home to Cleveland where he has an even deeper and younger team to work with in the Cavs. Unfortunately last season, LeBron James did not win the regular season MVP, an award he’s accustom to winning over the years. In fact that went to his close friend from the Oklahoma City Thunder, Kevin Durant. Due to this coupled with the fact that KD is emerging as the next big NBA star, Durant was made the face of the NBA 2K15 campaign this year. He has created a great brand for himself over the years and is using that to help brand the new and improved NBA 2K15 game.

However, this isn’t all a win-win for Durant. While Durant may be on the cover, he is unfortunately not the best rated player in the game itself. That prestige belongs to none other than our very own LeBron James. LeBron James has been ranked a 98 overall in the game while Kevin Durant is behind by 3 points at 95 overall. This season, 2K Sports has implemented a new policy in terms of ranking and is making the overall ranking average a lot lower than we have previously seen. In fact, there are only 4 players that are ranked above 90 within the game. If you remember, LeBron James was actually ranked a 100 last season after taking the Miami Heat to their 2nd championship in-a-row and being the NBA MVP for the 4th time in his career. Since then, LeBron has continued to improve his game and even this past season he had to take on a lot more responsibilities with the injuries that haunted Dwyane Wade. So while LeBron is obviously a better player today then he was in last season’s game, this new ranking system has caused the 2-point decrease in LBJ’s ranking.

Overall, of the 4 players that are ranked over 90, Tim Duncan is one of them who barely made the cut by being ranked a 90. In terms of the 4th player, this still remains a mystery as the official rankings are not yet released. However, numerous sources point to Chris Paul as being that 4th individual to break the 90+ rank mark in 2K15.

What do you think of LeBron James’ ranking? Comment below. 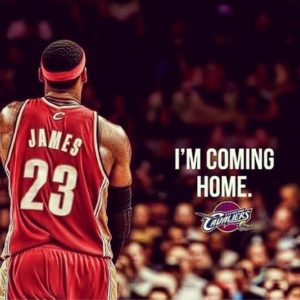