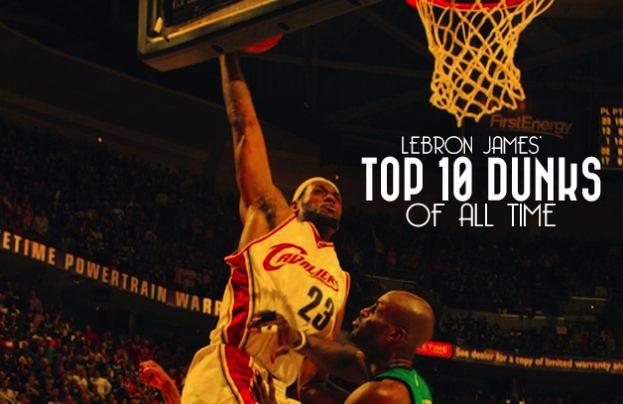 LeBron James has had many high flying and highlight plays throughout his career in the NBA. Here are King James’ top 10 dunks of all time!

The Suns actually believed that they could stop LeBron James. But knowing LeBron James, he wasn’t going to let them get too comfortable. Watch as LeBron James finds his way to the basket and lays a huge dunk.

#9. Jamming On The Pistons

Rasheed Wallace is foolish for even thinking that he stood a chance blocking LeBron’s shot. James has an ability to dunk on anyone in his way and make them pay. The best thing to do is to just let him get to the basket because you’ll save yourself some major embarrassment.

When will players learn? When LeBron James is running in transition, don’t try to get in his way because he can and will out play, and jump you. Damon Jones had to learn the hard way as he got a facial by James in transition. Some day players will learn but until then LeBron will continue embarrassing players.

What better way to make history than by performing a difficult catch for the throwdown. LeBron James moved into the record books in style indeed. Chalk up points number 25,000 and 25,001 on that royal flush!

Players try to study LeBron’s game, but never prevail. Here is a good example of how LeBron James can never be stopped. He’s just too powerful and way too athletic.

LeBron takes it all the way to the basket with a Tomahawk against the Bulls!

The Bulls are known for their defense but James brushes off their two best defenders on this play. The poster value of this is off the charts considering the players involved in the play. Big thanks to Jimmy Butler and Joakim Noah for their participation. Check out more on this dunk here.

Attempting to disrupt this huge freight train was perhaps the worst decision of Jason Terry’s career. LeBron James was issued a technical foul for the staredown but it was very much worth it.

Tim Duncan is one of the greatest centers to ever play in the NBA. Leave it to LeBron James to make him look like a rookie again with this monster dunk. Tim Duncan will never forget this play for as long as he lives.

Kevin Garnett has been known to be on positive end of defensive plays, however it’s a different story when he tries to defend LeBron James. James makes Garnett pay for being aggressive and embarrasses him badly. KG should stick to defending guys who aren’t named LeBron James.