On Thursday, the NBA announced that Cleveland Cavaliers forward LeBron James has been named to the 2016-17 All-NBA First Team. This marks James’ 13th All-NBA Team selection and his 11th time with a First Team appearance. The only other players to have 11 First Team nods to their credit are Los Angeles Lakers superstar Kobe Bryant and Utah Jazz star big-manKarl Malone. 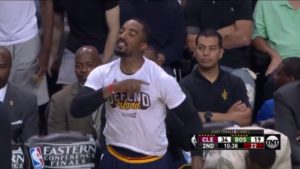 JUST IN: J.R. Smith yelled ‘get your a** up’ at Marcus Smart after apparent flop
Related TopicsCavaliersLeBron James