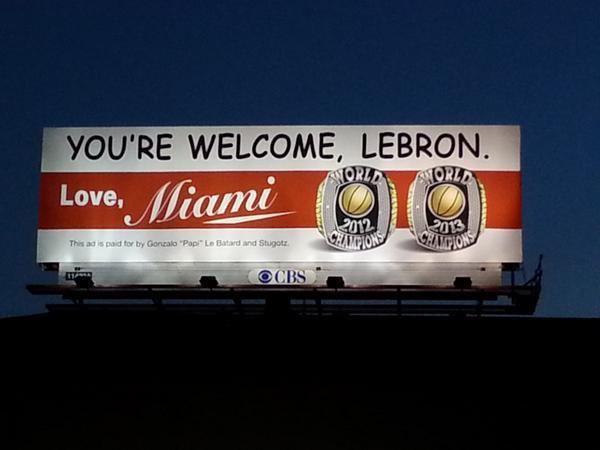 The revitalized city of Akron is holding a “Welcome Home” party in order to prepare the throne for the arrival of its beloved, King James. In just a matter of hours, 30,000 free tickets were vehemently bagged by eager fans waiting to usher in a new era of LeBron’s basketball career. If you are one of the lucky 30,000 to have secured an invite, you’ll be seeing a lot of things on the highway as you travel to the Akron fiesta. Expect clusters of traffic, an incoherent car-honking rally, and a series of billboards (As shown above) that say “You’re welcome, LeBron. Love, Miami.” Excuse me?

Before we start, prepare to indulge in the copious amount of sarcasm and zingers ahead of us. Let us have this! Miami sportswriter, Dan Le Batard (Too close to a word that so easily comes to mind), did this thinking that it would raise whatever pride is left in Miami in order to troll and kill Cleveland’s remarkable vibe. The problem is, he definitely underestimated the maturity of Cleveland. We have to be grateful for the past four years, and all of Cleveland should just raise a thumb (Or any finger of choice) of cynicism at those hysterical billboards. Here’s why:

{adinserter 2} Factually, if there’s anyone who deserves thanks for the past 4 successful seasons in Miami, it’s LeBron James. The world knows that. Honestly, LeBron should’ve had a billboard posted on American Airlines Arena saying, “You’re welcome, Miami. P.S. Happy hurricane season! Stay above sea level, and make sure to stand your ground! Love, LeBron. [winky face]” Politics and tensions aside, we don’t need to take the pretentiously assumed welcome of the billboards so personally. Even though Cleveland has every right to be infuriated with Miami, we don’t want to stoop to that level. Cleveland has had to cope with difficult times, and we’ve learned to come out of them with class. We thank you, seriously.

Thank you for Kyrie Irving, Dion Waiters, and Kevin Love. Without your thievery of the Cleveland spirit, we wouldn’t have had 4 humbling seasons that gave us an unmatchable chance to start over. We know that our team has two things you’re reaching dangerously low levels of: cap space and youth. The Cavaliers are not only built to win a championship right now, but have the sustainability of a team that’s due for a decade of greatness. Thank you for the NBA’s next dy-NASTY.

Thank you also for giving LeBron the experiences in his 4-year exodus. We now have a playbook, a living blueprint for winning multiple championships, and a future brighter than what we could have ever possibly imagined had LeBron stayed. As LeBron put it in his letter: “Miami, for me, has been almost like college for other kids. These past four years helped raise me into who I am. I became a better player and a better man.” Now, he’s doing what makes him happy, planning on finishing whatever’s left in the tank of the L-Train here on his home tracks. Thank you for turning the story of LeBron into a fairytale.

Lastly, thank you for being a part of the symbolic Cleveland-Miami relationship. Together, we have begun a new rivalry that every basketball fan will look forward to. We can’t wait to see you when you come to LeBron’s first home, when we come to his second home on Christmas, and hopefully, deep into the playoffs. Godspeed, Miami.