LeBron James Takes His Guys Out After Practice

Last week, LeBron James announced that he would be leaving McDonald’s and would be partnering with the up and coming restaurant Blaze Pizza. The pizza place has hundreds of restaurants open across the country and many still to come.

The Cleveland Cavaliers are scheduled to play a preseason game tomorrow night in Columbus, Ohio at the Schottenstein Center, The Cavs have played seven preseason games there, and hold a 5-2 record.

After Sunday’s practice in Columbus, LeBron took his teammates out to eat at his newly endorsed restaurant, and shared it with everyone on Twitter.

Only right that I come to Columbus and enjoy a great pie @BlazePizza!! Love it. Thanks for the hospitality guys. pic.twitter.com/fJT76gsEkp

Only right that I come to Columbus and enjoy a great pie at Blaze Pizza. Love this place to much! Thanks for the hospitality guys. 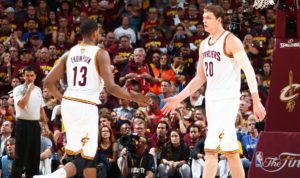