You know that the recent NBA Finals between the Cleveland Cavaliers and Golden State Warriors was such a big hit when it gets a mention at a huge setting outside of basketball.

RELATED: Ted Cruz got Cleveland crowd off its feet by referring to LeBron James and the Cavs’ success

The recent reference to that epic June showdown was made at the Democratic National Convention. Of course there were issues, and a lot of cheers and jeers were heard from the crowd, but former Denver Mayor Wellington Webb had an idea in an attempt to cool the masses.

Webb called on the people to come together akin to how LeBron James and Stephen Curry did after the NBA Finals, as transcribed by Hemal Jhaveri of USA Today Sports.

Just as we watched LeBron James and Steph Curry shake hands after a well fought final, we know the country is eager to watch these two giants to move forward together to champion progressive causes and most importantly to ensure we swear in a president come January who will uphold the ideals we hold most dear…they both deserve our cheers.

We all know how heated that series became and it even unveiled another version of Curry, a “mouthpiece-throwing” one that many failed to see when the Warriors were cruising through the regular season. But in the end, although it didn’t show any handshake between the two MVP’s, the respect was very much existent between LeBron James and Stephen Curry. 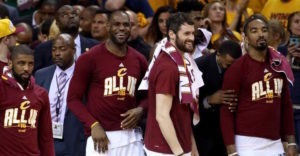