LeBron James sings praise for Mike Brown ahead of Game 1 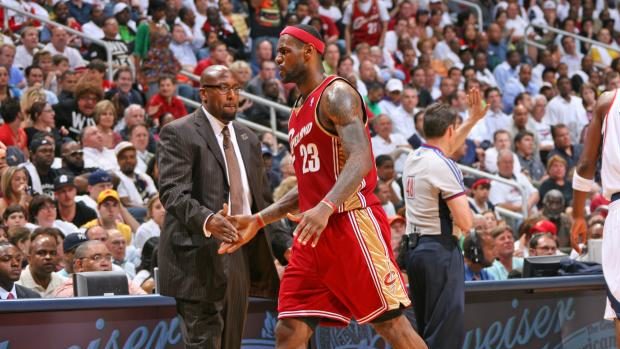 As most basketball fans know, the defending champion Cleveland Cavaliers and Golden State Warriors are destined to clash in the NBA Finals for an unprecedented third consecutive season. There are several notable storylines heading into Game 1, including the absence of Warriors head coach Steve Kerr.

Coach Kerr has been dealing with complications from a prior back surgery — an ailment that could cause him to miss the Finals entirely. Former Cavaliers head coach and current Warriors assistant head coach Mike Brown has taken the reigns in Kerr’s stead. However, over Memorial Day weekend, coach Brown came down with an illness that caused him to miss practice. Coach Kerr mustered enough strength to face the media in Brown’s absence, saying: “The good news is the team is really healthy. The bad news is that the coaches are dropping like flies.”

Despite his back pain, coach Kerr has tried to maintain a presence with the Warriors. In fact, he has been with the team in some aspect (Skype) nearly every day since their series against the San Antonio Spurs. According to Ann Killion of sfgate.com, Kerr is “definitely planning to travel to Cleveland.”

“I’ve been in every meeting, every film session and practice, coach Kerr recently said. “I address the team quite a bit. I think we’ve found the right balance between (having me) help out but not be on the sidelines. Once we get to Game 1, it might be a good time to make a decision one way or another.”

Coach Brown, who served two stints as head coach of the Cavaliers, is known for his great defensive mind. LeBron James knows this fact quite well. After yesterday’s practice at Cleveland Clinic Courts, James spoke to members of the media with regards to Brown’s expertise at that end of the floor.

“Their defense is extremely good,” James said after yesterday’s shootaround. “You add Mike Brown … he’s damn good defensively. It definitely helps that out a lot.”

LJ: Their defense is extremely good. You add
Mike Brown … he's damn good
defensively. It definitely helps that out a lot.

We’ll just have to wait and see if coach Brown’s presence has an impact on the Cavaliers in their quest to defend The Larry O’Brien trophy. Game 1 is scheduled to tip at 9:00 p.m. EST on Thursday night, with ABC having live broadcast coverage. It’s the matchup everyone has been waiting for — the rubber match of all rubber matches.