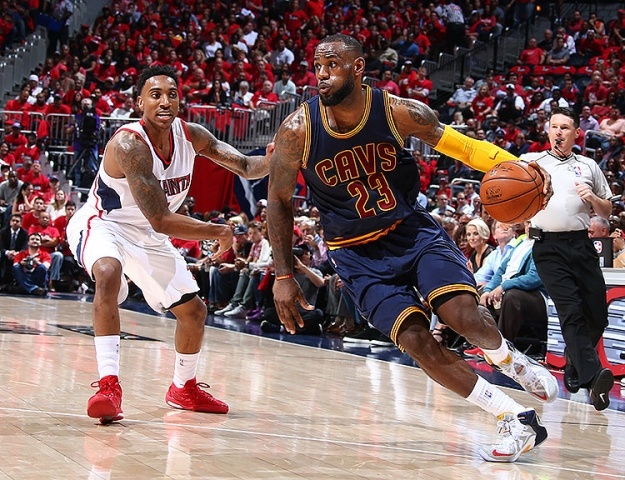 LeBron continued to dominate the Hawks in Game 2, nearly notching a triple double with 30 points, 11 assists, and nine rebounds. As Shaq put it – “It was the King’s game tonight”. LeBron, however, was a bit more modest, stating that it was a collective team effort. Whether it’s DeMarre Carroll, Paul Millsap, a double-team, or even a triple-team, LeBron knows how to beat his defenders and continues to do it with ease. His biggest advantage is being a triple threat – being able to effectively drive, pass, as well as shoot the ball and having a high basketball IQ to know which to do. Check out some examples of each:

We all know LeBron can drive to the basket and score:

Despite a double team, LeBron has the speed to drive down the baseline and finish strong at the basket. He reads the defense and sees an opening coming off of Mozgov’s screen and takes advantage of a slower DeMarre Carroll.

LeBron was able to get DeMarre Carroll on his heels and it was all over. LeBron drives in and does a signature jump hook over a few defenders for 2.

Here LeBron absolutely takes control. After getting the ball at the top of the key, LeBron calls for the iso, recognizing he has a mismatch against Mike Scott. LeBron gets a clear lane and takes it to the hole, blowing by Scott and picking up the and-1.

LeBron kills some time towards the end of the third and, knowing he can take the smaller Kent Bazemore, drives past him and finishes with a sweet touch of the glass.

LeBron also showed off his shooting ability in Game 2:

With DeMarre Carroll anticipating LeBron to drive, the king was able to step back to make some space and sink the jumper. Going into Game 2, LeBron was just 7 of 49 from beyond the arc in the playoffs. While he was only 2-7 from three point land in game 2, this is still better than he has been doing.

Here LeBron secures the ball on the perimeter and faces DeMarre Carroll. LeBron spins towards the basket, the pulls back for a sweet fadeaway jumper that Carroll can’t touch.

After getting the ball and a screen from Tristan Thompson, James sees he has some room against Paul Millsap and makes him pay, knocking down another 3.

With all of the Hawks focused on the King, he was able to find some open Cavs:

LeBron James is able to back down DeMarre Carroll into the paint. When LeBron realizes he is being triple-teamed he is smart with the ball and kicks it out to Delly. Delly can then facilitate some ball movement and get the ball to an open Mozgov for a silky smooth jumper.

LeBron spins past Carroll and attracts ALL of the Hawks, leaving Shump wide open to splash a 3 ball.

Here LeBron briefly catches Kyle Korver trying to play some help side D in case LeBron drives to the basket. James catches Korver slipping and dishes it out to Shump Daddy, who easily knocks down another 3.

LeBron gets Teague to switch onto him. Knowing this is a mismatch, DeMarre Carroll sags off Dellavedova in case LeBron tries to get by Teague. LeBron sees this and tosses it over to Delly who knocks down a 3 before Carroll can recover. Talk about reading the D!

LeBron draws a double team on back to back possessions, both leading to kick outs. Both passes led to three balls from Shump and Delly. When will the Hawks learn?

After almost committing a turnover, LeBron recovers and makes a cut to the basket. As Delly delivers the ball, James draws a double team and flips the ball to Mozgov who is wide open under the basket. A sweet assist!

Before checking out, LeBron knew he had to get a sweet alley-oop to Tristan Thompson. First James, gets the double screen, then a double team from Carroll and Horford. Thompson reads the defense and springs into action as LeBron lobs one up for a sweet dunk.

And that is why LeBron is virtually unstoppable. No matter what defense you throw at him, he can beat it. Sag off too much? He’ll pull up. Play too close? He’ll blow by you? Double team him? He’ll find the open man. Through the playoffs, LeBron is shooting 43%. Within 10 feet of the basket, that percentage rises to 61%. He also knows how to find open men. When given a pass from James, Kyrie has shot 47%, Shumpert has shot 48%, and James Jones has shot 44%. When taking on a double team or picking up help side defense in the paint, LeBron can count on Thompson and Mozgov, who are shooting 61% and 41% off of James’ passing. All roads in Cleveland go through LeBron, which in turn means the Cavs can’t be stopped. The King can do everything – and then some. 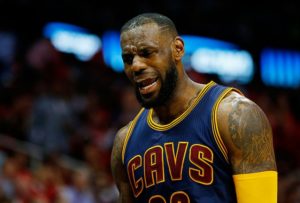