LeBron James does everything on the basketball court. He dishes assists, pulls down rebounds, gets steals, blocks shots and of course, scores the basketball. On top of being arguably the greatest leader the league has ever seen, James’ abilities on court will see him break new statistical ground in the NBA that will like never be repeated. No one has elevated the production of teammates quite like James has done throughout his career, but even with his all-time passing talent, the four-time MVP could still realistically break the game’s all-time scoring record as well.

The coveted record currently belongs to Lakers legend Kareem Abdul-Jabbar at 38,387 points. At age 32, James is sitting at 28,399 points, exactly 9,988 points behind tying Jabbar. The Cavs will want to hang on to their number one seed in the east, which will likely see James play most of the remaining games in the schedule. Assuming he continues his scoring average for this season at 26 points per game, James will pass Shaquille O’Neal for 7th place on the NBA’s all-time scoring list towards the end of the season.

As for the all-time record, Reddit user cjsplash brought the idea of James possibly matching, and surpassing, the highest total when his career is all said and done.

The Cavs have a two game lead on the Wizards and Celtics, so out of the remaining 17 games remaining in the season, let’s assume James plays 14 of those games to ensure the Cavs keep their place atop of the standings.

Even at age 32, James is showing absolutely no signs of slowing down and it’s fair and realistic to say he would average 25 points per game next season. At just 1,211 points before breaking into the 30k club, with the inclusion of a couple games of rest, James should reach 30k at around the 50th game of next season. At that pace, James would be on track to achieve the milestone before the All-Star break or almost immediately afterwards. This would be in the month of February, 2018 and James will be 33 years of age at the time.

Now that we have a clearer idea of when James will likely reach 30k, it’s easier to project his attack on the top spot on the scoring ladder and whether or not he will pass Jabbar.

As James gets older, he will continue to undergo his scheduled rest, so for the purpose of numbers and playing it safe, we’ll pencil him in for 70 games the next four seasons, and lower his total games played to 65 games when he reaches 36 years of age in the latter stages of his career.

As we stated earlier, James is showing absolutely no signs of slowing down. Because of this, taking into account his rest, it’s reasonable to assume James will average 25 points per game for the next four seasons. Although it will be tough to do, it’s still realistic and doable for the king with the rest we are considering.

If James were to do this, and average 25 points per game for the next four seasons whilst playing 280 games (70 per season), it will give him 7,000 points.

James takes care of his body as well as anyone we’ve ever seen play, and many believe he can and will play until he’s 40 years old, making the record a very achievable one.

Let’s now look at latter stages of James’ career after the age of 36. Understandably, his production and games played will have a significant dip. If we then lower his games from 70 to 65 at 18 points per game for the next three seasons, that would give him another 3,510 points, leaving him at around 38,909 points which would pass Jabbar.

Let’s go a step further and say James was to average just 16 points per game for those remaining three seasons at 65 games a year, he would put up another 3,120 points. Adding that up it would still be enough to pass Jabbar as James would sit at 38,519 points.

All these numbers are assuming James stays healthy which he has done for his entire career. His durability and sustained excellence makes the record very achievable one. There are various factors that could affect the number crunching, but it’s safe to say James has a legitimate chance at becoming the game’s all-time leading scorer when his career is over.

James is in pursuit of being labelled the greatest player of all-time, and becoming the NBA’s all-time leader in points would be a considerably hard argument to ignore. The record would be even more impressive considering scoring may not even be his biggest attribute.

The chase is on. 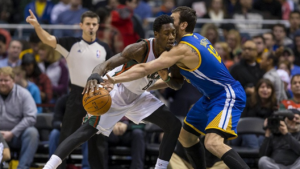